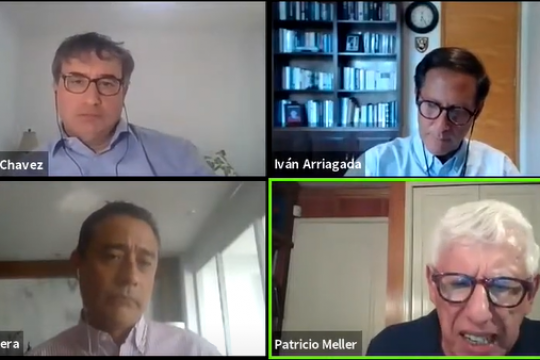 Chile EfD researcher Carlos Chávez along with Patricio Meller, edited a book that analyses the current situation of the mining industry in Chile and Perú, and set many challenges from an environmental perspective. The book titled La Gran Región Minera: Chile y Perú (The big mining region: Chile and Perú) was presented on December 15th virtually. This publication gathers a series of articles presented in the context of a seminar cycle that includes the experience of development in the region based on natural resources. Besides, the book analyses the evolution of mining activity in both countries and their future challenges from an environmental point of view, including the use of energy, the demand of water, and the production of pollution and waste.

Carlos Chávez precises that “the region Chile-Perú has comparative advantages in terms of natural resources, but there are fundamental changes that must also be considered. Nowadays it is not only important to know how much and how fast we are producing, but also the mechanism of production must be revisited. The new discussion about the development based on natural resources is the origin of this book”.

What is also relevant is that the mining activity in Chile has helped to face the new scenarios generated by the health crisis of Covid-19 pandemics, especially in terms of economic stability. According to Chávez “even though the pandemics has forced a change in the way that the industry operates, it has maintained its level of activity during the crisis. Besides, copper prices have increased in comparison to the past years”. He added that although the pandemics has led to the loss of labor, “the mining sector, in spite of the loss of workers, has maintained the Chilean economy”. The researcher also indicates that in Chile “mining is still a key sector and it contributes to the 3% of direct employment, a percentage that increases when indirect employment is considered. Additionally, mining is the main exporting activity of the country, because more than 50% of the Chilean exportations come from this sector”.

The book is divided in three main sections: mining in Chile, mining in Perú and future challenges of the industry. Moreover, the topics covered include sustainability, environmental regulation, communities, License for Operation (LSO), social conflicts, legislation in both countries, investment costs and technology.

If you are interested in mining production and its environmental effects, you can access to the online version of the book by clicking on this link.