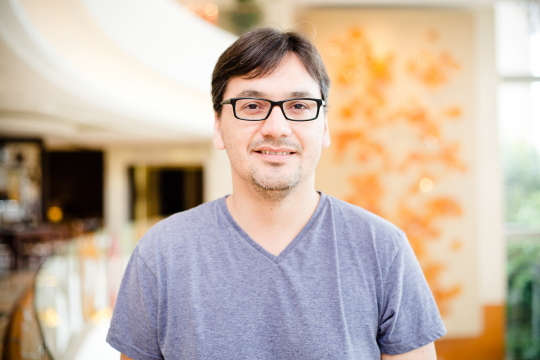 César Salazar is looking for solutions on how to reduce plastic in our oceans. Photo: EfD

How educating kids may help turn the tide on ocean plastics

Plastic pollution in the ocean is a severe problem for Chile. Meet César Salazar, Associate Professor at Universidad del Bio-Bio, Chile, and a senior researcher at EfD Chile. He has been part of a very interesting research project on plastic pollution, with promising results.

Why is plastic pollution a big problem for Chile?

It is a serious concern in Chile, not because we are a big, global contributor of plastic waste, but because the country is narrow and has a long coast.  Much of our economic activity is dependent on the ocean – fisheries, aquaculture*, and tourism. Things that affect our coastal communities, like ocean plastics, have very big impacts on our lives.

In Chile, we don’t have the problem of plastics washing up from other parts of the world as some other countries like Costa Rica have. The one exception is Easter Island. It’s a tiny island in the middle of nowhere and it gets plastics coming from other parts of the world. But the big problem in Chile simply relates to how we manage our solid waste. In particular, we don’t recycle. We don’t have the culture or the infrastructure for that. Some recent research done with colleagues shows that only around one percent of Chile’s municipal waste is recycled or reused.

But there is some progress. We’re the first country in Latin America to ban plastic bags. We are also introducing the extended producer responsibility strategy. It says that the firms that generate the waste have to take care of it until the end of the chain. They have to cover the costs of the waste that’s generated. But that initiative is just getting started, so I imagine it will take a few years to see significant effects.

What research are you doing on plastic pollution?

I've been involved in a project that is finished now, where we implemented an environmental education program on plastic marine pollution for 4th-grade children in the central south of Chile. We based it on material from a U.S. program by the National Oceanic and Atmospheric Administration (NOAA) and adapted it to the Chilean reality. We not only provided knowledge about the problem but also included messages that appealed to the personal responsibilities of children with respect to their contribution and solution to the problem We evaluated the impact of this program on knowledge, attitudes, and practices regarding the consumption and recycling of plastic among children.  We also tried to explore the intergenerational transmission of information to parents – how giving information to children can change behavior for the whole household. We are finishing it up, although it has been delayed a bit by outside events, including COVID-19.

Our preliminary results are quite promising. They show significant effects on the children in terms of their attitudes and behavior. For the parents, we used an indicator based on how they actually pack the children’s lunches and how much plastics are included. It’s still a preliminary result but it appears that educating students about plastic waste, results in less single-use plastic in their lunch boxes. Another interesting dimension, although also still preliminary, is the gender effect. It appears that households with female students are more responsive to the educational program.

Tell me about your international collaboration on oceans!

We started the CMar collaborative in 2018. It involves ten countries including Chile. We have a four-person team working in the program in Chile: Marcela Jaime and myself are working with the plastics and waste marine pollution components of the program and our colleagues, Carlos Chavez and Jorge Dresdner, are working on the component that involves the sustainable management of fisheries and aquaculture.

When EfD started the collaborative marine program, we had a completely blank slate. We started with intense discussions with colleagues from Vietnam, Costa Rica, Sweden, Tanzania and South Africa. Those discussions helped us develop a set of research issues that cut across those countries, even though each situation is unique. Then we look at each country and see what research that makes sense for them.

What are some of the benefits of this multi-country collaborative?

Collaboration is the key to everything. Throughout our environmental education project, we were connecting with our colleagues in the CMar program. We have long discussions with our colleagues, presenting our results and getting feedback.

Also, we have two CMar colleagues from outside Chile involved in the project, Francisco Alpizar and Fredrik Carlsson. They will be co-authors with us on the publications coming out of this project. That’s another example of how we benefit from working with our international colleagues.

* Facts - aquaculture
As the demand for seafood has increased, technology has made it possible to grow food in coastal marine waters and the open ocean. Aquaculture is a method used to produce food and other commercial products, restore habitat and replenish wild stocks, and rebuild populations of threatened and endangered species.<
There are two main types of aquaculture—marine and freshwater.