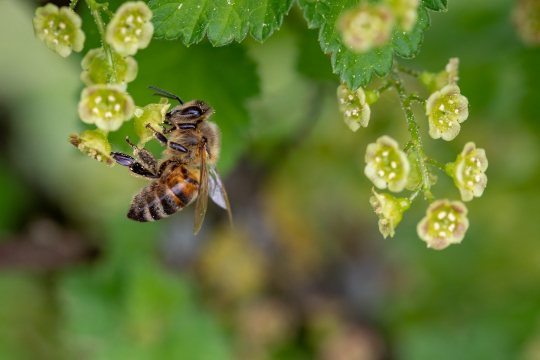 Pollination is one of the areas that was valuated. Photo: Myriams Foto, Pixabay

In March 2021, the United Nations Statistical Commission took a major step toward moving beyond traditional measures of economic well-being by officially approving a framework for ecosystem accounting. EfD’s researchers have played an important role in developing methods to support ecosystem accounting.

The System of Environmental-Economic Accounting – Ecosystem Accounting (SEEA EA) enables the measurement of nature’s contribution to economic and social well-being. It enables environmental considerations to have equal standing in the decisions made by governments and the private sector.

"The adoption of this economic and environmental framework is a historic step towards transforming the way we view and value nature,” said UN Secretary-General António Guterres.

“No longer will we allow mindless environmental destruction to be considered as economic progress."

Nature has been taken for granted

The economic contributions provided by healthy ecosystems have often been taken for granted when making important economic decisions. The SEEA EA offers a rigorous and consistent approach to measuring and valuing important ecosystem services like clean water, productive soils, and recreational opportunities in a way that is often missed in standard economic measures like gross domestic product.

The SEEA-EA was years in the making and involved a global community of government policymakers, researchers, and members of civil society.  EfD is part of this community and has been at the forefront of developing and applying techniques to support ecosystem accounting in a developing country context.

Starting in 2014, EfD partnered with the Swedish Environmental Protection Agency and the World Bank on Ecosystem Services for Development (ESforD), a project to develop valuation estimates for three different ecosystem services in six countries.  The project filled an important gap. While there has been a great deal of work on valuing ecosystem services in developed countries, much less has been done in a Global South context – a particularly glaring shortcoming, since the natural resources play such a vital role in many of these countries’ economies.

Needs to align with national accounting

Furthermore, despite the wealth of valuation studies of natural resources, comparatively little has been oriented to support ecosystem accounting efforts, which require consistency with the System of National Accounts used in developing governmental statistics.

The ESforD project involved EfD centers in China, Costa Rica, Ethiopia, Kenya, South Africa, and Tanzania, and produced valuations for three ecosystem services in each: water purification from forests, pollination, and urban green space.  The project significantly added to the knowledge base in these countries, some of which had very little experience with ecosystem accounting. EfD researchers collaborated closely with government officials in project design and implementation.  For example, in Costa Rica researchers developed working relationships with the Central Bank of Costa Rica, the national water supply company, and the municipality of San José and discussed the research design and data availability with the stakeholders during a policy-science meeting, opened by the former Minister of Energy and Environment Carlos Manuel Rodríguez (now CEO and Chairperson of the Global Environment Facility).

Juha Siikamäki, the chief economist for the International Union for the Conservation of Nature, led the ESforD project as Principal Investigator. The SEEA EA working group on valuation and accounting produced five discussion papers as input into the revision. ESforD members Matías Piaggio and Jane Turpie were co-authors on one of the papers, Defining Exchange and Welfare Values, Articulating Institutional Arrangements, and Establishing the Valuation Context for Ecosystem Accounting.

The ESforD members also participated in face-to-face meetings associated with the revision, including the Forum of Experts held at Glen Cove in 2018 and 2019.

Marks the beginning of a new era

The adoption of the SEEA EA marks the beginning of a new era of incorporating the contributions of natural capital into government decisions, and EfD is committed to continuing to be a part of this change.  For example, staff at EfD’s Nigeria center provided an overview for government officials on key concepts of ecosystem accounting. Jane Turpie has been working on ecosystem accounts for South Africa as part of the innovative, five-country Natural Capital and Valuation of Ecosystem Services (NCAVES) project, sponsored by the United Nations Statistical Division with support from the European Union.

Siikamäki reflects that a key to the project’s impact was designing it for a long-lasting contribution.

“It’s important that research addresses the immediate needs of the current moment but also looks beyond them”, he said.

“We intentionally designed ESfD to both support the immediate needs of decision-making and help lay a foundation for long-lasting impact. The SEEA EA is poised to help transform how governments evaluate the role of ecosystems and nature, and it’s great that EfD could help moving forward what is potentially a revolutionary change.”