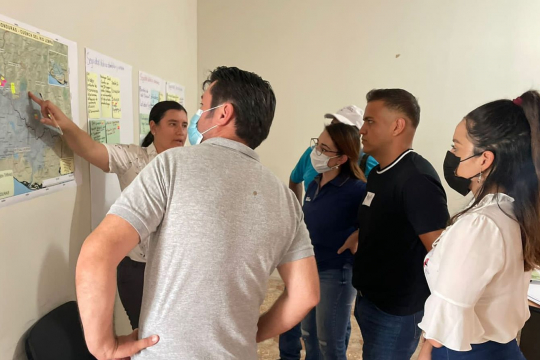 The area where the Lempa river basin is located is shown in one of the maps during a meeting with key stakeholders from El Salvador, Honduras, and Guatemala. Image: Eduardo Pacay

Researchers analyze the feasibility of a tri-national water fund

EfD Central America researchers, Roger Madrigal, and Eduardo Pacay visited the Trifinio Region, where the territories of El Salvador, Honduras, and Guatemala meet. The purpose was to network and gather information on the feasibility of creating a water fund for the Lempa River basin.

"This water fund is an innovative mechanism for the shared governance of a transboundary river basin. It poses major challenges, but at the same time, it has the potential to benefit thousands of vulnerable communities and productive sectors," said Roger Madrigal.

The strategic engagement of key partners from the start is necessary to increase buy-in and enhance a participatory process that includes the government, the academia, the private sector, technical experts, and especially, the Trinational Executive Secretariat of the Trifinio Plan.

They also organized two workshops in Esquipulas, Guatemala, and in Ocotepeque, Honduras, with the participation of public and private stakeholders from these countries.

"In these workshops, we collected important information on water security, and about institutional and financial aspects of water in the region," said Eduardo Pacay.

The river is overexploited

The main channel of the Lempa River is 422 km long, and it covers territories in El Salvador, Honduras, and Guatemala, with approximately 960 000 inhabitants. The area is characterized by rich biodiversity and water capacity, but currently is facing increasing pressure.

"This river is highly exploited for hydroelectric production, irrigation, and fishing, among others," said Eduardo Pacay.

"We need to provide information for decision-makers from the Trifinio Region on the feasibility of developing a water fund," he added.

"It is important for decision-makers to know if a water fund could be an ideal mechanism to help guarantee safe, permanent, and sufficient access to water for communities and the functioning of the ecosystem," concluded Pacay.

Financing of the the activities

The activities by EfD Central America's researchers are part of the project titled Feasibility for a Water Fund in the Trinational Lempa River Basin: El Salvador, Guatemala, and Honduras, which is financed by the Inter-American Development Bank (IADB).

Water Funds
Water Funds are financing mechanisms that emerged as a local response to the challenge of water security from a vision mainly focused on the conservation aspects of watersheds. They provide multiple nature-based solutions to the water security challenges. With Water Funds, the governance of water resources can be improved, and scientific information can be provided to identify the challenges to be solved and help decision making.
Source: (Latin American Water Funds Partnership, 2022)