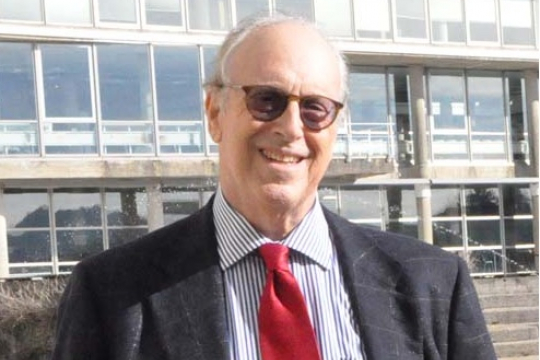 Michael Hanemann describes himself as an applied microeconomist who wants to understand why people do things and why institutions work the way they do. This has been the golden thread in his long career. He came to Berkeley in 1976 where he stayed until 2011 when he “retired”. But he has been teaching at Arizona State University since then.

“ASU is maybe the most dynamic university in the US,” says Michael Hanemann.

He works among others with California water issues and climate change.

“California has a much more dysfunctional water system than many other states. That makes it so interesting – if you are a doctor, you want to tend to the sickest patient.”

If you ask him why California is so dysfunctional, he takes you on a long, fascinating historical journey back to the mid-1800s when the settlers came to the state and implemented a system based on the English Riparian laws. The other Western states copied those laws first but soon modernized them and installed water rights courts or agencies. California was the last state to make those reforms, and it has implemented the fewest of them.

“You must look to history to understand the water systems and regulations of today,” he says.

California is to some extent still stuck with regulations that may have worked in England in the 1800s with lots of rain and few people. But it’s an understatement to say that contemporary California is a very different story. According to Michael Hanemann, the leadership in the state has unfortunately been very reluctant to make changes.

“When there is a drought, for the last hundred years the state government more or less hands over the problem to the users and says ‘try to save water’”.

However, water is of course an issue that is urgent globally, not least in the Global South. Michael Hanemann’s keynote presentation will focus on why conventional thinking about water results in poor economics and bad water policies.

Many aspects make it complicated

“Water is very expensive to supply, even more so than electricity and gas. You need to finance an infrastructure that may last for 70-100 years but has to be installed and paid for upfront,” says Michael Hanemann.

“Also, the great majority of water costs are fixed costs so, if you cut down the water consumption, the price per gallon increases since the fixed costs have to be covered just the same. And should poor people pay as much as the rich? Cross-subsidizing users is illegal for publicly owned water systems in California. There are many aspects to water that make it complicated and interesting and difficult to find regulations and tariffs that are both effective and fair.”

If there is something he takes a little extra pride in, from his long career, he mentions the case of the native American Hopi tribe in Arizona and their claim for water rights. He got involved in this along with another EfD researcher, Dale Wittington. There was a trial to determine how much water the government owes the tribe, for taking their land and sending them to a reservation.  The trial lasted for three years and the ruling appeared just now, rejecting a Hopi claim for water for their distinctive religious and ceremonial needs – a novel type of claim that had been formulated by Whittington and Hanemann.

“We continue to write about the justice for the claims. This is an example of bogus economics and totally unethical acting from the government,” he says.

Michael Hanemann is planning to write a book on the economics of water with an emphasis on institutions, social attitudes, and distinctive physical features of water rather than the conventional microeconomics.

Those who attend his keynote presentation may get a sneak peek into what he will discuss in that book and they will certainly get an interesting insight into the world of water economics. Don’t miss it!