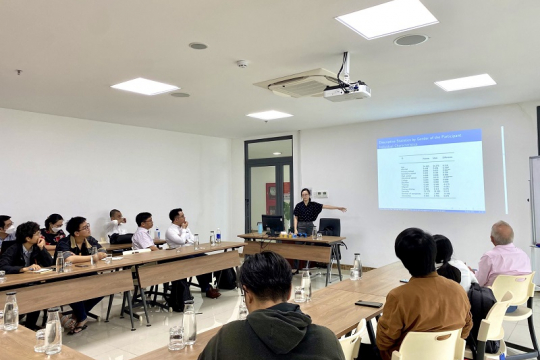 In many countries, gender inequality remains a social problem that manifests in several aspects of society, including in the labor market. One visible example of such inequality is the difference in wages paid to men and women for the same job. Besides the explained variation, how can you investigate the unobservable differences in attitudes towards risk and negotiation that result in the wage gap between the two genders?

In Vietnam and other countries, despite ongoing pro-women movements, females continue to be disadvantaged in terms of resources, opportunities, and decision-making processes.

In the recent study titled The role of risk and negotiation in explaining the gender wage gap by Pushkar Maitra, Ananta Neelim, and Chau Tran, the authors examined the effects of risk and negotiation preference as invisible behavioral attributes that lead to the wage gap between genders. Negotiation can improve salaries and lead to career advancements, but previous literature has indicated that women are less willing to ask for a pay raise than men, especially in cultures that are not open to negotiations. In addition, women have been found to be more risk-averse, thus do not tend to take risks in their career development and are content with jobs that offer stable earnings.

The study methodology included a descriptive analysis using Vietnam Household Living Standards Survey (VHLSS) data, a lab-in-the-field experiment, and an associated survey. The experiment was conducted to get data for measuring an individual’s risk and negotiation preferences, while the survey asked questions on observable characteristics (gender, age, education level) and labor market outcomes (occupations, wages, bonus, overtime work, the number of hours worked) to grasp the difference in wage between the two genders. The sample included 320 men and women aged 15-60 working in the same industrial zone, with at least 6 months of prior working experience.

Results from the descriptive analysis of VHLSS data revealed that wages for females across non-agricultural sectors are lower than males’ wages. Overall, the difference is 16.3 percentage points, meaning women generally earn 16.3 percentage points less than men. Evidence from the experiment indicated that women were more likely to choose options that offer a sure payoff, thus are more risk-averse compared to men. Moreover, the propensity to negotiate is 62.8% for males and 54.8% for females, meaning women are generally more reluctant to engage in negotiations. In the regression approach using a dummy for females as the only explanatory variable, the results indicated that females are 12.7% less likely to initiate negotiations compared to males. Finally, results from the post-experiment survey showed that earnings per hour for females are 6.7 percentage points lower than hourly earnings for males.

Policies are needed to narrow the gap

This study contributes to the literature on gender inequality, different outcomes in the labor market, and unobservable variables in the behavior of men and women. Overall, the study found gender differences in preferences for risk and negotiation are associated with a 29% reduction in the gender wage gap. In addition, these behavioral variables are found to attribute 15.5% to the unexplained component of the men-women gap in earnings. Therefore, unobservable characteristics such as risk and negotiation preferences play an important role and should be taken into account in shaping policies to help narrow the income gap between men and women.