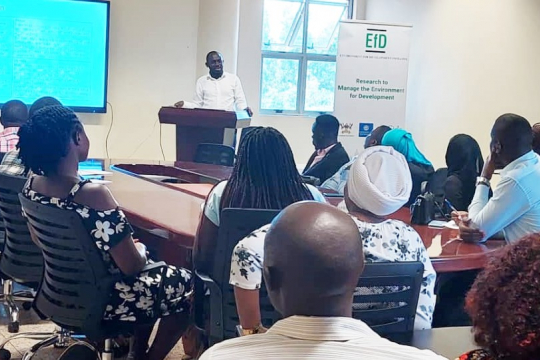 Better policies and regulations are needed to develop off-grid energy

There are several obstacles to developing off-grid energy in Eastern Africa. Those are, among others, according to a recent study by EfD Uganda, poor market information, lack of technical capacity, insufficient regulation, and lack of funding.

In light of recent growth in the off-grid energy sector due to the falling costs of solar PV technology, this paper examines the barriers and opportunities for off-grid sector development in four countries in Eastern Africa: Ethiopia, Kenya, Tanzania, and Uganda.

“We compare the perspectives of private companies in each of these locations, which relate both to constraints and opportunities and link them to the current development of off-grid energy in each country,” says Peter Babyenda.

“Moreover, we measure trade-offs among the different mechanisms that government regulating institutions would  apply to support or regulate the off-grid sector in form of an experiment to the respondents so that they are able to select the best mechanism that the regulating bodies can use to support their sector.”

The idea of this paper was originally conceived in Ethiopia but the researchers found that the off-grid sector is not as vibrant in Ethiopia as in other Eastern African countries. Thus it was better to have a comparative study.

The study is based on a survey of nearly 200 off-grid firms, located in four Eastern African countries with off-grid sectors of varying maturity. The survey reveals a set of common challenges but also great variation within and across countries.

Moreover, firm responses emphasize the need for much greater policy support, on all levels: subsidy, financing, access to foreign exchange, technical assistance for regulatory matters, and capacity building. The DCE sheds further light on these policy preferences and clarifies common threads as well as country differences.

“We argue that the policy and the regulatory climate, and the implementation of those aspects, makes a big difference in firms' perceptions of opportunities and constraints in the sector,” Peter Babyenda concluded.

Though the off-grid sector appears to be growing in these countries, in large part due to falling costs and policy momentum, many obstacles remain, and these will continue to challenge the achievement of SDG7: Sustainable, modern energy for all.  It should also be noted that Uganda has the most liberalized energy sector in Eastern Africa.