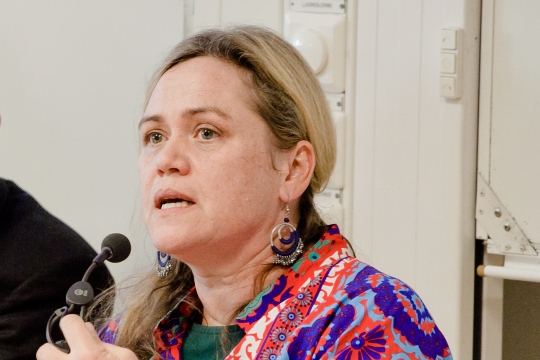 Behavioral economist Prof Martine Visser is pioneering the use of ‘green nudging’ methods to encourage people in a developing world context to adopt pro-environmental behavior in the interest of the common good. Her award-winning work at the EfD-South Africa center helped the Cape Town municipality manage severe water shortages during the worst drought in the region’s recorded history, showing how evidence-based research can support governments through similar climate shocks. As the climate crisis worsens, Visser will expand this work to test how nudging methods can mobilize society, overcome the social inertia that hinders the appropriate response to ecological overshoot, and support communities to thrive in these uncertain times.

Prof Martine Visser grew up on a farm outside of Cape Town, South Africa, and from an early age developed an understanding of how people depend on natural resources. She also developed a curiosity about how to share and manage these common goods fairly in the context of society as unequal as South Africa’s.

‘This tuned me into the dynamics of poverty and inequality,’ she says.

"People are selfish and rational"

Today, Visser is the director of the Environmental Policy Research Unit (EPRU), EfD’s South Africa center based at the University of Cape Town’s (UCT) School of Economics. It is here that she has become one of the foremost behavioral economists in the Global South, exploring the economic, cognitive, emotional, psychological, cultural, and social reasons for why people and institutions make the choices that they do.

‘Neo-classical economics is based on the idea that people are selfish and rational,’ she says. ‘The discipline of behavioral economics challenges this. It maintains that there are other reasons driving people’s behavior, such as social norms and preferences, things like trust, reciprocity, risk avoidance, and inequality aversion.’

During her doctoral studies at the University of Gothenburg, Visser investigated the role of environmental and behavioral economics in guiding cooperative management of the commons in the context of inequality. After completing her studies, she returned to UCT in 2007, where she had been working since 1998, and later helped establish EPRU.

Over the years, she has worked extensively on the ground, within communities, to test how various behavioral economics theories translate into real-life, applicable projects. One of her specializations is in a niche area of behavioral economics: how green nudging methods can help drive pro-social behavior amongst citizens, particularly in resource-constrained contexts. Visser and her team have been able to test and apply these behavioral interventions at the coalface of governance and policy design in a developing city context (see ‘Day Zero’ - what developing world governments can learn from Cape Town’s drought).

Being part of the EfD network, and having access to EfD funding and support, has extended the reach of Visser’s work beyond South Africa. Most recently, this has allowed her to work with a team of researchers who are looking at how farmers in Namibia and Tanzania are responding to weather uncertainty and tenure insecurity.

‘In this project, we are looking at how providing weather information to farmers can help increase their uptake of technology that may improve their resilience to climate change,’ Visser explains. ‘We looked at whether the information relating to early forecasting for adaptation to climate, or adopting certain technologies, can reduce farmers’ uncertainty in the context of climate variability. We wanted to understand if poorer, rural-living people value this kind of information.’

Manage commons in the climate crisis

A second recent project looked at women entrepreneurs in rural villages in Rwanda, who are engaged in small-scale entrepreneurship in the solar lighting sector. The study looked at the link between their business success, and social preferences such as risk aversion, pro-social behavior, and competitiveness. It also considered how empowering women in this context may have positive spillovers for the rest of their households.

Visser hopes to expand this work to investigate how behavioral economics methods can bring positive behavior change relating to how society manages and protects the commons in the context of the global climate crisis.

She is also working with EPRU colleague Associate Prof Reza Daniels and researchers at several other EfD centers on the network’s collaborative marine plastic pollution initiative, as part of the Sustainable Management of Coastal Marine Resources (CMaR) project.

‘Humanity is facing the unprecedented threats of climate and ecosystem collapse in an epoch we are now calling “the Anthropocene”,’ says Visser. ‘These threats are underpinned by a societal inertia relating to the economic and political systems which are driving inequality, political uncertainty, and planetary overshoot.’

If societies hope to respond appropriately to these complex global risks, citizens and governments must create a unified understanding of pro-social behavior. This needs to come from a fair distribution of the rights and responsibilities of shared resources in the global commons.

‘For this phase of our research, I hope to investigate how we can encourage citizens to adapt their behavior and decision-making to account for the risks caused by increased pressures on the shared commons, such as the climate system,’ says Visser.

In January 2018, the South African city of Cape Town was at the peak of the worst drought in over a century of record-keeping. After three years of low rainfall across the sub-continent, Cape Town’s municipal dams ran so low that the city announced it was within three months of implementing its most extreme emergency water rationing measures.

This became known as ‘Day Zero’, the day when utility managers would shut off water to homes and businesses outside of the central city. Residents would only be allowed 25 liters of water per person, per day, which they would have to collect from distribution points around the city in hand-held containers.

The drought had started in 2015, and as it progressed local government took some steps to slow down water use across the city. They increased the price of water, put water restrictions in place, and steadily tightened these. They fined those who flouted restrictions and threatened to name-and-shame the worst offenders or regulate their water use with water cut-off devices. The city also ran a communications campaign, including the use of online tools — a Water Dashboard and the ‘Think Water’ website — which gave regular updates about dam levels, and information on how the public could save water.

One of the most dramatic interventions was the release of the Critical Water Shortages Disaster Plan, which laid out the practicalities of what would happen if the city had to implement ‘Day Zero’ restrictions.

Capetonians responded overwhelmingly positively: in nearly three years, people reduced their water consumption by half, faster than places like California in the United States, or Melbourne in Australia, who had faced similarly severe droughts in the previous decade.

But how well were these strategies working, and which were the most effective to change water use behavior?

EPRU was well placed to answer these questions, and help the city adapt its water management strategies as the drought unfolded.

Before the drought started, Prof Martine Visser and a team of behavioral economists at EPRU — including Johanna Brühl, Megan McLaren, Dr. Kerri Brick, and Dr. Samantha DeMartino — were already working with the local government in Cape Town to test how a series of ‘green nudging’ interventions could encourage water and electricity saving behavior amongst residents of the city.

Ramped up the measures

For six months, they had been running an experiment where they send a series of simple, positively-worded messages to households through the municipal billing system, all of which urged people to use water more sparingly. These messages went to 400 000 households in different income brackets. The economists then looked at how people responded to these sorts of interventions and compared these results with the city’s usual efforts to encourage water-saving behavior, such as with the tiered block-tariff pricing system.

With this experiment already running as the drought hit, the city agreed for the EPRU team to continue monitoring water use, particularly as the municipality began ramping up measures to encourage water-saving behavior.

By the time the drought finally broke in the winter of 2018, Visser and her team had three years’ worth of data from which they could draw robust analysis to inform policymaking, not just for Cape Town but for any city in the Global South going through similar climate-related resource shocks.

The most important lesson learned through this is that people respond positively to social recognition, where they are praised publicly for being water-wise. Wealthier households, they found, didn’t respond that much to financial incentives, such as water price increases or information on the cost of excessive water use. Water restrictions did work. People also responded well when given clear, salient information. The shock-factor of the announcement that ‘Day Zero’ water restrictions were imminent in the summer of 2018 seemed to have had the largest sudden impact on water use behavior.

Was awarded for groundbreaking work

While Visser’s research looked at the impact of behavioral ‘nudging' tools and empowering communication strategies to drive water-wise behavior, the team’s research also looked at how technology such as smart water meters installed in homes or schools can influence people’s water use. This involved working with city and provincial-level officials and politicians, to build capacity within their institutions to support them in their water management.

In recognition of how this groundbreaking work has contributed towards ‘achieving sustainable water management, knowledge generation and solutions’ in South Africa in the past decade, Visser received the NSTF-Water Research Commission (WRC) Award in 2019. Later that year she also received the WRC Knowledge Tree Awards for Sustainable Development Solutions: Emerging Researcher.

Went from research to application

Speaking about the significance of Visser’s research, which was funded by the WRC, water use and waste management executive manager Jay Bhagwan at the WRC said that this approach of using green nudges and other non-coercive approaches to change behavior had, through the EPRU work, gone from ‘research to application’.

The ultimate goal of this work is to empower local government to mainstream behavioral nudging as one of the key approaches to influence long term behavior change on water use and conservation, according to Bhagwan.

In 2019, Visser also received an excellence award from the University of Cape Town, and in the same year was shortlisted for the NSTF-Lewis Foundation Green Economy Research and Innovation Award which acknowledges outstanding contributions towards achieving biodiversity conservation, environmental sustainability, and a greener economy.