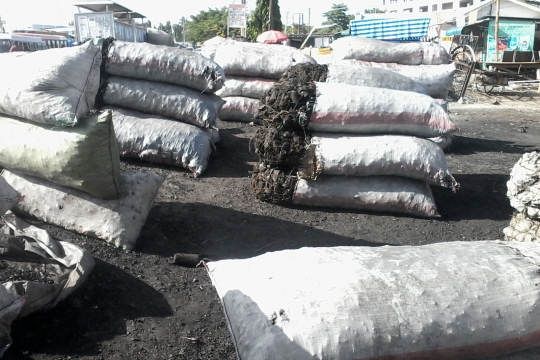 Charcoal is the most commonly used cooking fuel for urban households in Tanzania. But charcoal use has complex implications for climate change, poverty, and health.

“Cutting trees to make charcoal is a major cause of forest degradation,” explained Dr Razack Lokina, Director of Efd-Tanzania, “and forest degradation is a major cause of climate change.” Forests in Africa sequester billions of tons of carbon. Cutting down trees removes this carbon sink, and burning the charcoal releases carbon into the atmosphere. The charcoal process tends to involve degradation, in which trees are cut, but the forest still exists, rather than wholesale deforestation.

One response to forest degradation is a program called Reducing Emissions from Deforestation and Forest Degradation, or REDD.  As part of international climate policy, donors have been paying communities in developing countries to avoid forest loss. Communities receive REDD payments if the rate of forest degradation is reduced under their management. In Tanzania, there are a number of pilot REDD projects. One of them, organized, by the Tanzanian Community Forest Conservation Network, is underway in 31 villages.

The problem is that REDD sets up incentives to change the behavior of local villagers, or forest “insiders,” but most of the demand for charcoal comes from “outsiders” – urban charcoal consumers  –  and much of the production is also done by outsiders. “Some trees are cut by local villagers,” said EfD researcher Prof. Jo Albers. “But most charcoal is illegally produced by people who don’t live in the village that is receiving the REDD payments.”

Villagers in Tanzania struggle to prevent the illegal activities that degrade their forests. “We recently surveyed rural residents,” said EfD researcher Mr. Stephen Kirama, “and the majority of those surveyed said that the condition of their local forest has been getting worse over time.” This discouraging result is often the result of illegal charcoal activities by “outsiders.” However, “‘insiders’ also rely on forest products for their own subsistence and livelihoods, and some of this harvesting is illegal under the community’s rules” said another member of the research team, Dr. Elizabeth Robinson. “Their actions, when unregulated, can also degrade the nearby forests.”

One solution might be a trade-off in which villagers have increased legal rights to collect resources for their own needs. “We have found cases where villagers don’t report illegal charcoal activities because the villagers knew they were also breaking the rules,” said Prof. Albers. “If these local people were operating legally, they might be more likely to cooperate in enforcing rules against outsiders.”

Beekeeping and other livelihood activities have also been introduced into REDD villages. In some cases, trees are planted specifically for charcoal production, thus relieving pressure on existing forests and providing an alternative way for insiders to make a living. However, these initiatives rarely benefit outsiders, and so pressures to protect the forests are likely to continue so long as urban demand for charcoal remains high.

An integrated approach to forest management is critical, added Dr. Robinson. “Otherwise, illegal harvesting will simply be displaced from a forest where enforcement is good to a different location where enforcement is weak.” For example, Kibaha’s forests are already vulnerable because they are close to Dar-es-Salaam. If Morogoro’s forests are successfully protected against charcoal production destined for the capital, Kibaha’s forests will be under increased pressure. While visiting the Kibaha Forest Reserve, the research team frequently saw abandoned charcoal pits and young men transporting charcoal on their bicycles, headed for Dar-es-Salaam.

Encouraging Tanzanians to cook with fuel-efficient stoves is also on the policy agenda. Cooking with either charcoal or wood on a daily basis exposes household members to dangerous particulates. In addition, reliance on forest fuels affects the ability of women and girls to escape from poverty, added Mr. Kirama. “My research shows that women do 80% of the wood collection,” he said. “That is time that women could spend on more productive economic activities.” Other researchers have found that collecting wood takes away time that girls could spend in school.

Forest conservation projects in Tanzania have made fuel-efficient stoves available to local households to reduce their reliance on forest products. For poor households in both urban and rural areas, the expense of buying a new stove is one reason that there is still so much demand for charcoal.