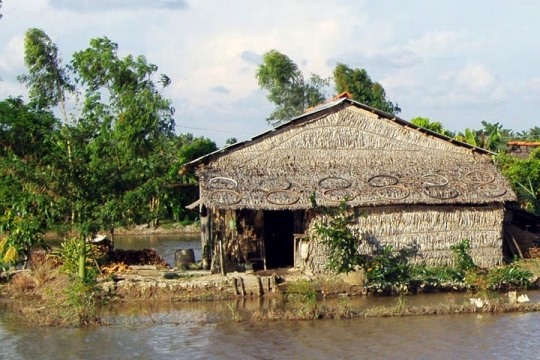 The Mekong River Delta (MRD) – an economic zone with 20% of Vietnam’s population, contributing one fourth to the total GDP of Vietnam – is facing a severe change of flooding risk due to the growing period of urbanization, industrialization, and the construction of hydroelectric dams upstream. The most frequent disasters in the MRD are the flood and severe inundation of some areas, especially during the rainy season, causing not-a-small damage for the farmers who have major incomes from growing rice and other agricultural activities. As a result, farming households in the MRD have to rely on the post-flood reliefs and donations in the events of an extreme flood. However, only 15% of the losses of crops and investment in agricultural activities is offset by the post-disaster subsidy from government.

Motivated by the increasing flood risk in the MRD and its possible severe impacts on the livelihood of farmers while the market for crop insurance has not been developed, a group of Vietnamese researchers surveyed farming households in three districts of the MRD, which have been affected by floods and other natural disasters in recent years. Main factors to be considered in the study are the insurance premium, type of provider, coverage, deductible, and the types of risk covered. The impact of fear of flooding and charity hazard – the reliance of farmers on government disaster relief – on the preferences for flood insurance, perception about flood threat, coping ability and household characteristics are also examined.

Their results show that farmers are willing to pay for flood insurance and the types of risk being covered are important. When the inundation and windstorm are also being covered, they are willing to pay higher. Insurance plans are considered more desirable when higher damages to be compensated while the deductible level up to 25% does not matter. Another finding is that private and foreign insurance companies have much lower advantage than mixed-ownership companies in providing the services.

Depending on types of risk covered and types of provider, the willingness to pay (WTP) for the insurance plan with 2 million VND/1000m2 cover and deductible of 25% varies from 200,000 to 500,000 VND/1000m2/season (1 USD = 22,550 VND at the moments of study). This could imply a considerable potential of the market for agricultural flood insurance in the MRD. If this market is deployed, the Vietnamese government could reduce the burden of subsidy for disaster relief in the MRD by fully compensating the damages, and thus help avoiding the poverty trap triggered by disastrous events.

Another common worry is also answered; that the fear of flood and charity hazard does not affect the preference and WTP for agricultural insurance, and therefore these are not considerable obstacles in the development of the insurance market.