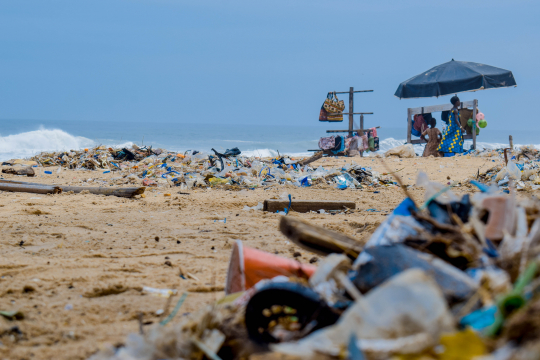 Plastic pollution is a global problem, but the best solutions, differ from country to country. Photo: Lucien Wanda, Pexels

EfD research used as a roadmap to eliminate plastic pollution

The Global Plastics Action Partnership (GPAP) is a major public-private partnership aimed at tackling global plastics pollution. It’s now is drawing on EfD expertise as it creates a roadmap for how to do this in practice.

In its initial work GPAP is collaborating with the governments of three countries – Vietnam, Ghana, and Indonesia – to create and implement policies to reduce plastic waste. These pilot efforts have support from the highest levels of the respective governments.  Ghana’s President, Nana Akufo-Addo, expressed his enthusiasm for the partnership when announcing the nation’s participation.

“Ghana is taking a historic step forward in our environmental stewardship, our sustainable growth, and our vision for the future,” he said.

“We are pleased to partner with the Global Plastic Action Partnership to bring together existing efforts, scale-up these highly successful initiatives, and fast-track our progress towards a collective goal – to achieve zero leakage of plastic waste into our oceans and waterways.”

The GPAP is focused on the creation of effective, innovative, and data-driven policies to reduce plastic waste. Identification of such policies requires a rigorous framework that can serve as a toolbox for finding approaches that fit the context of individual countries. Fortunately, the foundation for such a framework exists thanks to EfD, and GPAP is relying on it to achieve its ambitious goal of reducing plastics pollution.

A Framework for Selecting and Designing Policies to Reduce Marine Plastic Pollution in Developing Countries, published in 2020, traces a detailed impact pathway of plastics pollution and matches different stages of the pathway to appropriate policy interventions. The framework was developed by 11 researchers from seven different countries working together through EfD’s Sustainable Management of Coastal Marine Resources (CMaR) collaborative network. The easy-to-apply tool makes it possible to quickly identify approaches that are more likely to be effective in specific settings.

The power of the EfD framework is demonstrated by GPAP’s decision to adopt it as its roadmap for policy design in the three pilot countries.  The Partnership invited project leader Francisco Alpizar to join the GPAP Advisory Committee and the World Economic Forum’s experts’ network. Taking the next step toward on the ground implementation, GPAP issued a request for proposals in January 2021 for a tool that “would build off a framework outlined by a team of researchers led by Professor Francisco Alpizar Rodriguez at Wageningen University, A Framework for Selecting and Designing Policies to Reduce Marine Plastic Pollution in Developing Countries (Alpizar et al., 2020).”

The GPAP’s work in the pilot countries is just the beginning; the lessons learned will inform future efforts in other countries as the initiative expands and scales up. Nigeria is next in line. The GPAP’s use of EfD research will enable countries around the globe to identify the right policies to dramatically reduce plastic pollution.

CMaR has also worked at a practical level to assess the effectiveness of different approaches. In Chile, for example, EfD studied the effectiveness of educational approaches aimed at school-age children for reducing household waste.  The promising results from the study are shaping the development of an educational manual to be used more widely in Chilean school districts.

Facts GPAP
GPAP was created under the auspices of the World Economic Forum in 2018 with founding partners Dow, Nestlé, PepsiCo, The Coca-Cola Company, the Governments of the United Kingdom and Canada, the World Bank Group, and the World Resources Institute.  This multistakeholder initiative aims to reduce and eventually eliminate plastic pollution and waste worldwide by replacing the “take-use-dispose” model with a closed-looped approach throughout the plastics life cycle.