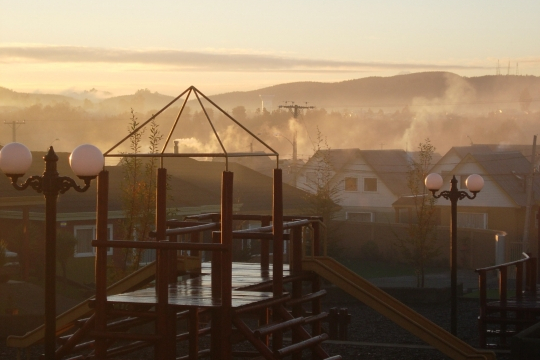 EfD Chile is working side-by-side with the Ministry of the Environment in the design of a wood stove replacement program and is now participating in developing strategies related to government urban air pollution programs.

Air pollution in urban areas of the country has been one of the major concerns of the Chilean Ministry of Environment, as more than 9 million inhabitants (48% of the population) are exposed to poor air quality. The pollution takes a severe toll on public health; more than 3,600 people die each year of cardiopulmonary diseases associated with chronic exposure to air pollution. Wood stoves used for home cooking are a major source of exposure.

To tackle this important problem, the Chilean government has implemented several stove replacement programs in more than 30 cities during the last decade. EfD Chile had an advisory role when the country’s very first pilot program of its kind was developed in a joint project with the Ministry of Environment ten years ago.

After almost a decade of implementation, it became clear that the programs needed to be systematically evaluated. During the COVID pandemic, most people in Chile worked at home, thus increasing the levels of heating used by households.

Takes a lead in the evaluation process

In 2020, an EfD-funded project brought together a team consisting of EfD researchers Carlos Chávez, Marcela Jaime, Randall Bluffstone, and Adolfo Uribe, a student of the Ph.D. Program in Economics at the University of Talca, to evaluate the effects of the stove replacement program on the use of heating stoves, fuel consumption, indoor air quality, and temperature (thermal comfort).  The researchers worked closely with several Chilean regional ministerial offices (Environment and Housing) and conducted their fieldwork according to recommendations from both the Ministry of Health and the Ministry of the Environment, with high levels of coordination between EfD researchers and policymakers.

The ongoing research is crucial for determining the impact of stove replacement on environmental quality and people’s health. Moreover, it will provide insights for the government about the interaction between air quality problems, the Covid-19 pandemic, and households’ behavior.

As a result of years working in this field, the Center has gained credibility with the government not only related to the evaluation of energy transition programs, but also for developing strategies to combat urban air pollution. EfD researcher Walter Gómez has been participating in a governmental committee aimed to revise and update the Atmospheric Decontamination Plan (PDA is Spanish) in the localities of Temuco and Padre Las Casas to reduce air pollution both inside and outside households.