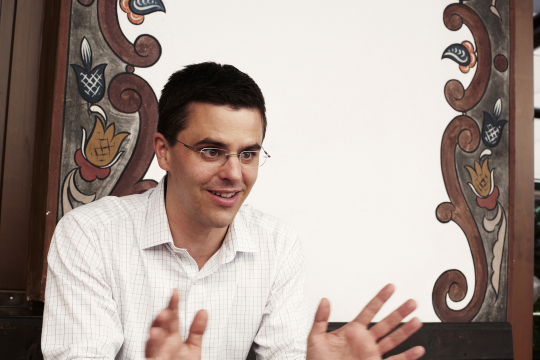 On the one hand, there are the climate change tipping points that we are approaching at an alarming pace. On the other hand, there are some positive and maybe surprising signals. Meet Gernot Wagner one of the prominent keynote speakers at EfD’s Annual Meeting who will talk about his interesting observations on this topic!

Gernot Wagner is a climate economist with a focus on climate risks and policy. He teaches currently at Colombia Business School, on leave from NYU.

Being the first in his family to even graduate from high school, Gernot Wagner has had a quite remarkable academic career. After finishing high school in his hometown Amstetten in Austria he moved to the US for college.

“I knew I wanted to study in the US but had no idea how to do that. I applied to exactly one school. In the end, of course, it was just luck,” relates Gernot Wagner.

That school was Harvard, where he holds a joint bachelor’s with highest honors in environmental science, public policy, and economics, and a master’s and Ph.D. in political economy and government. He also has a master’s in economics from Stanford.

Gernot Wagner met his wife, Siri Nippita, during his first year of college and now they live in New York City with their two young children.

He has always combined science with a practical policy focus.

Interacts in many ways

“I think it’s really important to not just write for peer-reviewed journals (which is of course important too) but to also engage with policymakers. That is, by the way, a field where EfD shines,” he says.

To interact with policymakers he has, among many other things, worked for almost a decade for the Environmental Defense Fund, EDF. He also writes the Risky climate column for the renowned Bloomberg Green.

His keynote presentation at EfD’s Annual Meeting in Uganda in September will, not surprisingly, be on climate change.

“I plan to focus on the interplay between the all-too-real negative climatic tipping points, and the positive socio-economic ones. There is plenty to worry about, but there are also some hopeful signs.”

Gernot Wagner emphasizes how more and more businesses commit to a transition to net-zero emissions:

“Of course, the far-out commitment alone is not enough. Some commitments read like headlines from The Onion: ‘Area drunk promises to get sober by 2050’.”

Mix of targets and forecasts

But there are some real changes afoot. Black Rock has recently published a report that says it expects 75% of its holdings to be aligned with net-zero goals by 2030.

“What we see is a mix between forecast and targets. That’s what makes it so exciting! Of course, we need the right policies too. A lot more has to happen. But the commitments of so many businesses are indeed interesting,” says Gernot Wagner.

If you want to hear him elaborate on those thoughts, don’t miss his keynote presentation at the EfD Annual Meeting!

Read more about the Annual Meeting!