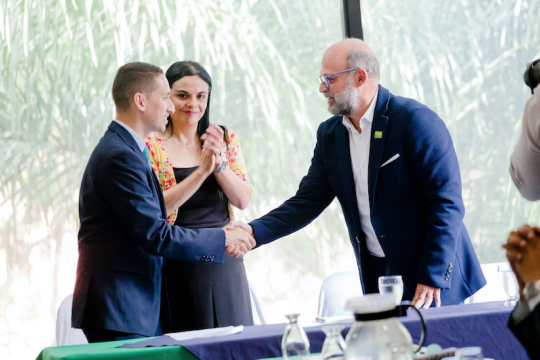 December 5, 2019.Last Thursday, December 5, the Municipality of Turrialba and the Ministry of Environment and Energy (MINAE) signed a letter of understanding that aims to generate a case study at the municipal level for the implementation of the project entitled "Towards a circular economy of local governments in Costa Rica" in the canton of Turrialba. This project will be funded by CATIE (Tropical Agricultural Research and higher Education Center) and the Climate Technology Network (CTCN), and in turn executed through CATIE.

The signing of the agreement took place in the framework of the workshop under the same name of the project, organized by the Initiative Environment for Development (EfD) hosted by the Research Program in Development Economics and Environment (IDEA) of CATIE in conjunction with MINAE.

This agreement seeks to improve the circular economy actions of the Municipality of Turrialba, as well as to generate capacities through a demonstration case that can later be applied in other municipalities. It also aims to facilitate the implementation of the National Carbonization Plan.

"CATIE maintains its commitment to continue working with municipalities and local partners to promote innovations in the circular management of their economies and the transition from production models to green economy models, in this context CATIE has an important role to generate knowledge and strengthen capacities at different levels," said Muhammad Ibrahim, director general of CATIE.

Along the same lines, Luis Fernando León, Mayor of Turrialba, expressed his satisfaction with the agreement, which he described as a very important step that will allow us to be pioneers in the field.

"The circular economy generates 1.1% of GDP worldwide, it is an alternative to the linear economy, because what it seeks is a maximization in the use of resources and, in this case, also of waste. We also seek to generate scientific evidence and an experience that can be used in other cantons," said León.

For her part, Marcela Guerrero, executive president of the Instituto de Fomento y Asesoría Municipal (IFAM, Municipal Development and Advisory Institute), highlighted the need for institutions and individuals to appropriate sustainable ways to manage waste, maximizing the use of resources and generating new business models. "Contrary to the linear economy that is based on using, producing and disposing, the circular economy breaks this cycle, seeks an alternative system where the reuse of materials generates a benefit," he added.

"For CATIE, through the IDEA Program, it is important to be part of an alliance that links the management of central government, local government and research. This type of alliance is key to generating the change demanded at the global level to move towards more sustainable consumption and production patterns," stressed Leida Mercado, leader of the Program.