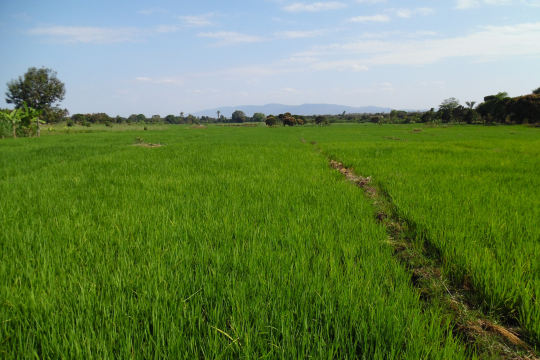 EfD researchers have studied the effects of a method of rice cultivation that can increase crop productivity and requires less water and fewer seeds. The study took place in Kilombero, a major rice-growing region in Tanzania. However, many farmers are reluctant to adopt this method despite all the advantages.

The method, the system of rice intensification (SRI), is different from traditional paddy growing, with permanently flooded rice fields. Traditionally, SRI builds on four principles: Early transplanting of the seedlings (1-2 weeks instead of 3-6), widely spaced plants to allow for regular mechanical weeding and reduce the competition for water, carefully controlled water management, and the use of compost to the extent possible.

There are several advantages to this method. SRI can deliver higher yields than the conventional paddy method while reducing input—fewer seeds, less water, and inorganic fertilizers. It is also reported to produce crops that are more resilient to extreme weather events, pests, and disease. In other words, it qualifies as a climate-smart agricultural practice.

Why then are so many Tanzanian farmers reluctant to adopt this method? There is a much higher acceptance for instance in Asia. Mare Sarr, who has done research in this field for many years says that there are different reasons.

“For one thing, this is a method that requires a lot of man-hours for activities such as field preparation, setting up and taking care of the nursery, sorting the seeds, planting, and weeding. All these activities require farmers to hire more workers, which can be very costly for a small and poor family farm”, explains Mare Sarr.

“However, there is also evidence that, as farmers learn the new technics, it becomes labor-saving after some 4-5 years”.

But there has also been skepticism among academics, since it may sound a bit too good to be true – that using less input could result in better output.

“On average, yields increase. But of course, not everyone gets the same results. Many farmers look at their own situation, and if they are not convinced that they will benefit, they don’t want to make such a radical change”, says Mare Sarr.

Another obstacle is that the variant of the SRI method introduced in Tanzania requires modern, improved seeds and chemical fertilizers. That requires an upfront cost that may be significant for poor farmers.

So, what could policymakers do to encourage farmers to adopt SRI?

“To be truly motivated to switch to this method, you also need to be fully aware of the impacts of climate change. So, investing in easily available technologies for weather reporting would be very valuable”.

Learn more:
An article on this topic has been published in World Development:
Who benefits from climate-friendly agriculture? The marginal returns to a rainfed system of rice intensification in Tanzania”
Link to the article
Authors: Mare Sarr, Mintewab Bezabih Ayele, Mumbi E. Kimani, Remidius Ruhinduka