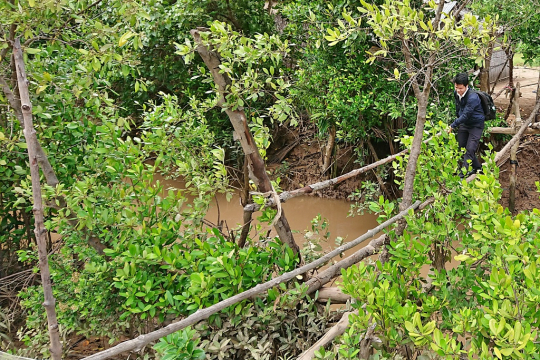 A researcher crossed the monkey-bridge to interview a household for their agricultural activities in the mangrove forest. Photo courtesy by Truong Dang Thuy

The mixed effects of mangrove deforestation in Mekong River Delta

Converting mangrove areas into surface water for shrimp cultivation is a common agricultural practice in the Mekong River Delta, Vietnam. This is due to a belief that more surface water allows for higher yield and productivity, but there are also concerns that less natural mangroves can bring environmental risks that hamper shrimp production. A recent study finds that mangrove deforestation has both positive and negative effects on aquaculture.

As a result of a major land policy reform in 1995 in Vietnam, farmers in mangrove areas can choose to convert part of their endowed forests into surface water for cultivating shrimp, given that they maintain a coverage rate of 60-80% according to their agreement with the local government or forest management boards. Using the Just & Pope (1978) framework to evaluate output risk in agriculture and aquaculture, the study revealed that such practice has a two-fold effect on shrimp production.

A higher mangrove coverage rate in a pond means less area for cultivation, limited sunlight penetration, and increased leaf decaying, which are factors unfavorable for aquaculture. Leaves falling from mangrove trees can become litter to the shrimp, and some mangrove species have certain compounds that are harmful to aquacultural organisms. While mangrove areas provide habitat to shrimp and feed species, they are also sheltered from predators and mollusk species that can attack or compete with shrimp for food. The study results showed that increasing coverage from 0% to 60% or 80% (according to the legally required rate) would decrease annual revenue from $3,200 to $2,300 or to $2,200 respectively.

… but also has risk-reducing effects

Mangroves also provide favorable conditions for shrimp production: They offer habitats and nutrients for shrimp and aquatic species that become feed, thus improving shrimp yield and reducing output volatility. They filter out hazardous substances in the water, thus enhancing water quality and promoting the natural production of shrimp seed. In addition, mangroves can provide alleviation and protection against extreme climatic conditions so that production is more stable and resilient to climate change events. For these benefits, mangrove forests play an important role in both increasing productivity and reducing output volatility. The study indicated that 1% less in coverage would increase revenue by $0.09-$0.12 per square meter, but also aggravate the risk in production. Put differently, increasing mangrove coverage turns uncertainties in shrimp yield significantly lower.

The authors also found that 60% is the mangrove coverage rate at which optimal productivity and profitability can be achieved.