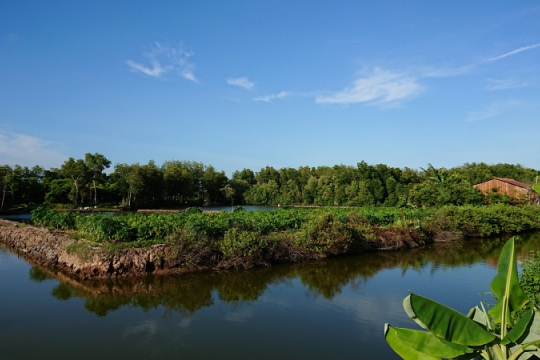 How effective is mangrove management decentralization in the Mekong Delta, Vietnam?

Does a devolution policy of forestland management to households help conserve forests? Does giving land use right as a property right or as per contract work better? A recent EfD research report by Truong Dang Thuy, Vo Quoc Tuan, and Pham Khanh Nam, examined 96 communes and 600 households in six Mekong Delta provinces in Vietnam to address these questions.

Mangroves constitute an important part of Vietnam’s ecology as they protect coasts from erosion, prevent salinization, and mitigate natural disasters. They are also home to diverse aquatic species and provide livelihoods to local people. In Vietnam, the Mekong Delta hosts the majority, 60%, of the total mangrove area in the country.

Before 1994, governance of forestland in Vietnam was centralized under the state authority, but in reality, the forests remained open access to local people with livelihood needs and interests. As a result, the mangrove forests in the Mekong Delta faced a significant 2.8 times decline in the area from 1975 to 1995 (from 200,000 ha to 72,000 ha) due to the conversion of mangrove to shrimp farms and overexploitation of forestry resources.

Devolution has been tested

Since 1994, the government of Vietnam has pursued a devolution approach in forestland management. The rights and responsibilities of forestland management are now devolved to households within a fixed period, who receive benefits from the assigned land and comply with regulations regarding forest coverage. Using satellite imagery data to estimate mangrove area, the study revealed an increase of 4.6 ha in coverage associated with one more percentage point of mangrove area assigned to households. This finding implies that devolution conserves mangrove forests better than centralized state management.

The study went further to investigate which devolution mechanism is more effective in conserving mangrove forests. There are currently two forms of forestland devolution in Vietnam: the forestland right certificate (red book) that assigns land to households along with the rights to transfer land, and the forest management contract (green book) with more limited use rights. The satellite imagery estimations reveal that red book holders have 10.1% points lower in mangrove area and are 2.5% more likely to violate the agreed coverage level, compared to holders of the green book. Thus, contract-based devolution turns out to be more effective when it comes to mangrove conservation. The above findings provide evidence-based input for a future revision of the current policy on forestland management devolution in Vietnam, especially regarding which mechanism to follow.