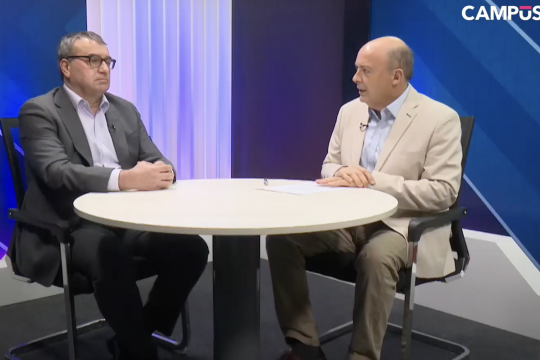 Professor Carlos Chávez at EfD Chile spoke with Iván Palomo, Professor at the University of Talca and host of the TV show “More Knowledge” about a stove replacement project that shows very promising results to improve the air quality and the well-being of households.

The World Health Organization presented recently a report concluding that 99% of the world's population breathes polluted air and that no country presents acceptable ranges. In addition, WHO estimates that seven million deaths a year occur as a result of this type of pollution.

Dr. Carlos Chávez, an EfD-Chile researcher, talked about an EfD-supported research project that evaluates the impacts of heating stove replacement on the TV show More Knowledge broadcast by the television channel of the University of Talca CampusTV.

The stove replacement program is one of a set of instruments implemented in Chile to deal with air quality problems.

"One of these tools is a subsidy offered by the government aimed at families changing their combustion equipment, typically wood-burning stoves that are old and inefficient, for more modern equipment and thus accelerate the energy transition," explained Carlos Chávez in the TV show.

Once the new equipment is installed, the researchers did apply a set of strategies to evaluate the results.

“We have a control group of households where there was no replacement, and in those that did, we installed temperature, air quality, and usage measurement by electronic monitoring equipment during 48 hours, in addition to surveys to characterize each household,” explained the researcher.

This is a collaborative program in which national and foreign researchers and their students participate. It is innovative in the sense that in addition to measuring air quality, it identifies and quantifies possible impacts on individual households, like the effects of new technology on the well-being of the household.

The results show that although the average temperature remained similar, the most efficient equipment showed less variation in extreme temperature. On the other hand, it was found that the cost of fuel is higher for efficient stoves, particularly pellet stoves, but that indoor pollution was significantly reduced.

“That is why it is so important to determine the cost of the new fuel because in this way decision-makers can implement changes that continue to facilitate the energy transition, like explaining to the users the importance of reducing indoor and outdoor pollution, or the evaluation of subsidies for new fuels, for example”, concluded Carlos Chávez.