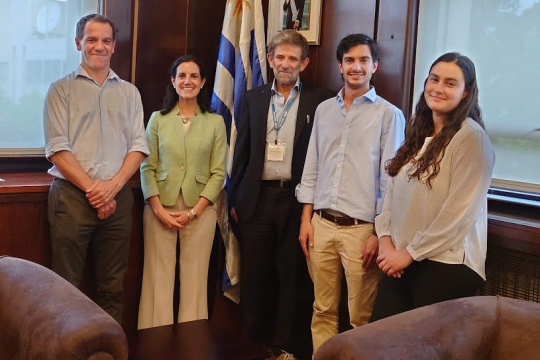 Thomas Sterner in the middle with Minister of Finance and Economics, Azucena Arbeleche, on his left side. Photo: EfD.

EfD researcher Thomas Sterner was one of the presenters at the RIDGE Forum Workshop on Environmental Economics, which took place in December in Montevideo Uruguay. He also got the opportunity to discuss environmental taxes with Azucena Arbeleche, Minister for Economy and Finance in Uruguay.

"They have already introduced a carbon tax on gasoline in the country. We discussed the possibility of expanding to other sources of emissions as well," says Thomas Sterner.

"It was a privilege to get a long talk with the Minister for Economy and Finance. In Uruguayan politics, she is the second most powerful after the president. She showed a clear interest in promoting the transition to a fossil-free society but also pointed to the many practical impediments in real politics."

His presentation at the conference was titled Carbon pricing and development.

About the conference
The three-day RIDGE Forum IV Workshop on Environmental Economics was arranged by RIDGE (the Research Institute for Development, Growth, and Economics), the Universidad de Montevideo, and LAERE (the Latin Americal Association of Environmental and Resource Economists)