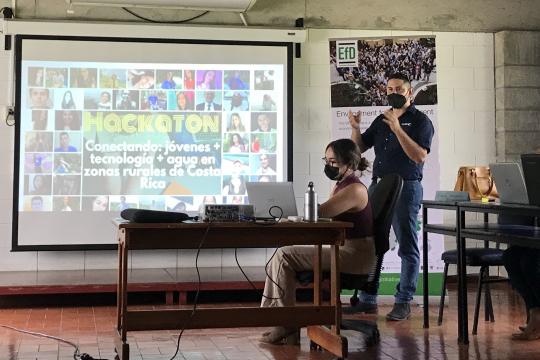 Information about the Hackathon was shared during one of the workshops held with water users and WCO representatives. Image: Marianela Argüello L.

The water community organizations (WCO) from rural areas of Costa Rica have the possibility to communicate better with their users, thanks to a new application named ASADAS+, which is now available in the different application platforms for mobile phones with Android, Harmony OS2 or iOS systems.

Bárbara Viguera, an EfD junior researcher, said that one of the main purposes was "to include modern technologies in a sector where the usual mechanisms of accountability and communication are inefficient, generating incentives for new generations to actively participate."

The reasons why the app is needed

"Water community organizations provide a service in many neighborhoods and towns of Costa Rica, but they need to comply with requirements in terms of accountability and transparency," explained Bárbara Viguera.

However, many times it's difficult to communicate efficiently on the topics of interest for the users.

"The application constitutes a channel to keep the users up to date on WCO issues and to facilitate communication and collaboration among communities and their WCO."

All the information is available

The final version of the app ASADAS+ was presented to the WCOs during the first semester of 2022.

"The app ASADAS+ allows the WCO to be more effective in collecting payments, fixing failures, and convening events such as assemblies, water cut-offs, and environmental activities, among others", explained Bárbara Viguera.

"On the other hand, water users will have all the information about the WCO available, and a mean to make consultations if needed."

Teresita Delgado Araya, a water user from the community of Sictaya, Turrialba, said that it's now going to be easier for her to know the means of payment, the important dates, as well as get information on regular consultations.

"The app ASADAS+ is a very important tool because people are going to feel that they have a closer relationship with us, with a more personal attention and in a shorter time," said Tatiana Ángulo Ángulo, administrator of the WCO from La Alegría, in Siquirres.

The application was an idea proposed by senior researcher Róger Madrigal, and Bárbara Viguera. It became a reality when the process of creating of the app took place, approximately two years ago.

In 2020, a team of professionals that also included EfD junior researchers Anthony Gamboa, Adriana Escobedo, and later, Susana Acuña, met with representatives from the different WCOs to inform them about the project and the app.

Regular meetings and workshops with each WCO were part of this process. In November 2020 a big step was taken. Groups of young people were invited to a Hackathon name Connecting: Youths + Technology + Water in Rural Areas of Costa Rica, to compete by proposing innovative ideas for the app.

"The process of design and creation of the app was originated by the ideas provided by the youths from the rural communities of Costa Rica, where three teams were awarded from a total of sixteen," said Anthony Gamboa.

"The participation of the youth was very important to create awareness in the new generation about the role of the WCO for the communities".

About the project
The project Accountability, Use of Technology, and Citizen Participation for the Improvement of Water Services in Vulnerable Communities in Costa Rica is funded by the Central American Regional Security Initiative (CARSI), from the United States Embassy in Costa Rica.