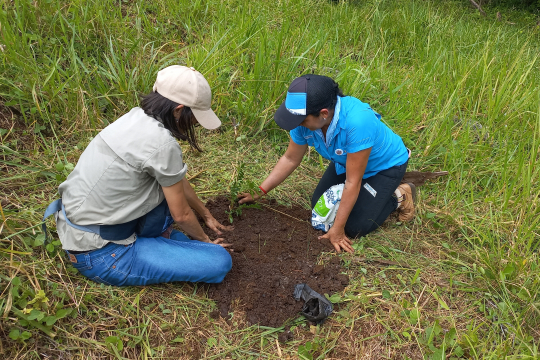 Planting new trees on the riverbank area was the main activity to start with the restoration process. Image: Claudia Medellín

A pilot activity that is part of the project called Diagnostic About the Possibilities to Develop the Green Infrastructure in the Caribbean and Pacific Coasts of Costa Rica, has been initiated in the province of Guanacaste, Costa Rica. The purpose of this activity is to restore riparian forests, which are forests located at the riverbanks, in an important area for water production.

This pilot activity covers 2,600 m2 and it is the first step to implementing the complete plan of restoration, which aims at restoring 78 ha. The plan was designed collaboratively with the National System of Conservation Areas (SINAC, by its Spanish acronym), and the Municipality of Nicoya, among other institutions.

The province of Guanacaste is affected by climate change every year.

During the dry season, there are droughts, and during the rainy season floods. The Biological Corridor Potrero-Caimital (CBPC) was created in 2006, to protect the wildlife areas, and manage the water resources of the region.

Some of the territories of the CBPC are in a bad condition. Riparian forests face threats such as wildfires, expansion of agriculture, and illegal logging. This affects the ecosystems and biodiversity directly.

The pilot activity area was selected because of the contributions of the territory to water supply, the vulnerability of the river to contamination, and the limits defined by the CBPC.

"Most of the section's parts established for the pilot activity are categorized as areas with a high to medium risk of being contaminated", explains Bárbara Viguera.

"This is one of the main reasons we need to protect and develop actions near water bodies such as the Potrero-Caimital river, to guarantee the quality of the water for human consumption and other productive activities."

On the local news

The main TV channel of Guanacaste, Channel 36, covered the tree planting event at the launch of the pilot activity, in their prime-time news program at the beginning of August.

The news channel showed the actions of the reforestation process for more than 10 minutes. Also, representatives from SINAC and the community were interviewed.