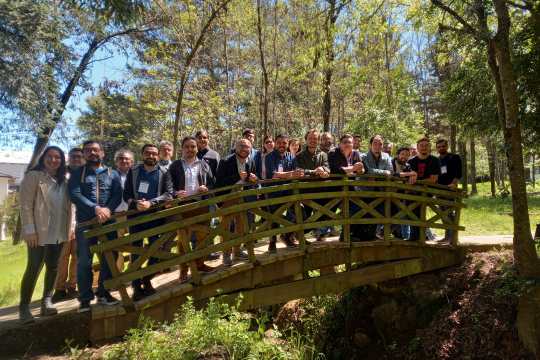 Participants of the workshop in Catillo Hot Springs (Parral)

The Eighth Annual Meeting on Environmental Economics was marked by face-to-face attendance and included the participation of representatives from the academic, political, business, and civil society fields.

The research center in Environmental Economics and Natural Resources, "Environment for Development NENRE - EfD Chile", held the eighth edition of its annual meeting, which brought together researchers, policymakers, representatives of companies, NGOs, and decision-makers, to discuss the main environmental problems of Chile and the Global South.

The Vice Chancellor for Research and Development of the University of Concepción, Andrea Rodríguez, greeted the audience and highlighted the importance of a meeting like this. “As researchers, we always seek that our work contributes to a better society, and the work carried out by NENRE EfD - Chile is a very clear and concrete example of this effort,” she said.

Several relevant people participated in the meeting, which was a great opportunity for researchers to discuss environmental policy directly with policymakers and validate their results. A panel discussion on salmon regulation included among others researchers Jorge Dresdner (Universidad de Concepción) and Carlos Chávez (Universidad de Talca), senior researchers from EfD Chile. During this session, Doris Soto, from the EfD-Chile partner research center INCAR, presented a Policy Brief, a "Proposal to establish a system that regulates the maximum possible production of salmonids in marine ecosystems according to their carrying capacity."

They propose a “traffic light system” that indicates with red when the production of salmon in a body of water should be reduced or even eliminated; yellow when production can only be stabilized or reduced; and green when meeting certain conditions, production can be increased.

Alejandro Barrientos, a representative of the Undersecretary of Fisheries and Aquaculture, who also participated on that panel, stated that this kind of research is highly appreciated because there are three major issues related to aquaculture that they are still incapable of managing correctly, which are the nutrients excess, the antibiotics, and the scapes.

“We need to assess these topics with quality research such as the ones presented in this workshop,” Barrientos said.

This workshop was also an opportunity to raise ideas to work together on research proposals. For example, Tania Sauma, Chief of Staff of the Undersecretary of Energy and Gender Manager of the Ministry of Energy of Chile, expressed how they are working to facilitate the incorporation of more women in the energy sector, with a program called Energy+Woman.

“Energy poverty has a woman’s face, so it is really important to enable a gender perspective to research,” she said.

Patricio Herrada from ANDESS, a company that unites almost all of the water and sanitation companies of Chile, commented on the challenges of being a company that provides water, but at the same time being privately owned or operated. Especially when there are still some rural households that don't have access to the service. He stressed the importance of working together with researchers to give the best possible service.

Contributes to the environmental agenda

The event featured plenary sessions to discuss topics such as the sustainability of the salmon industry, the water sanitation industry and its environmental challenges, and intersectionality in Chilean environmental policy.

In addition,  the researchers presented their work in parallel sessions, on topics such as Environmental Policy and Well-being; Regulation; Fishing and Aquaculture; Non-renewable natural resources; and Business, Government, and Sustainability Challenges.

Marcela Jaime, Director of NENRE EfD Chile, stated that "it is very important for us as a center to be able to bring together people from different fields, territories, and training, and enrich not only public policy, which is our objective, but also to broaden the vision of all of us who participate in this activity and complement our work with these new perspectives”.

The activity was carried out in a hybrid format, at Hotel Termas de Catillo, in Parral, between October 13 and 14, 2022.