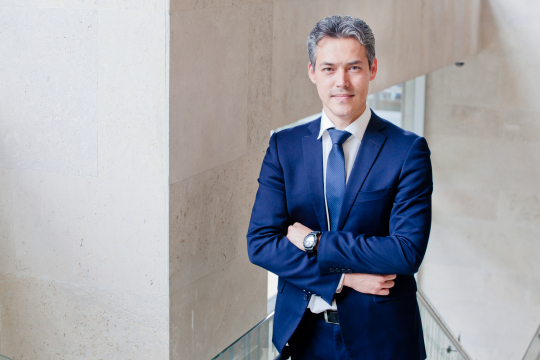 EfD is developing creative approaches to healthier air in Bogotá, where air pollution hits the poorest residents particularly hard. Meet Jorge Alexander Bonilla, Senior Research Fellow, and Director of EfD Colombia. He is an Associate Professor at the Department of Economics at Universidad de Los Andes. He spoke with us about his work on air pollution in Colombia’s cities and the need for innovative approaches to the issue

How did you get interested in environmental economics?
I started as a forest engineer. That’s my bachelor's degree. I was working on the Pacific Coast at a place called Guapi, close to the Natural Park Gorgona Island.  All the areas on the Pacific coast of Colombia are very rich in forests, biodiversity, and resources like mangroves.  When I was working there, I wanted to understand why there was so much overexploitation of natural resources.  I needed to understand people’s behavior and how to change it – what was driving their decisions? So I pursued a master's in environmental economics and general economics, and then I moved to Sweden to pursue my Ph.D. in economics.

But then your research has focused on air pollution. Why?
When I try to explain to my students why air pollution is important, I make this point: If I offer you a glass of polluted water, you have a chance to say no thank you.  With air pollution, you have no choice because you must breathe.  If we address several aspects of pollution, we may also indirectly contribute to solving other problems like climate change, water availability, soil health, and so on.

In Colombia, the problem of air quality exists in the cities.  It doesn’t just depend on the size of the city and the geography. For example, Medellin is smaller than Bogotá but is situated in a valley so the air pollution gets trapped there close to the ground. In comparison, here in Bogotá, we have mountains, but we are on a plateau and the winds help move away the pollution. So it’s a much more severe problem in Medellin, even though it’s smaller.

But even within cities, the impacts vary widely.  If you go to the Southwest of Bogotá, it’s worse than the average of Medellin.  Almost every day they are facing very high levels of pollution. And it’s a matter of inequality.  The air pollution is worse in neighborhoods with less income. The people there are more exposed and have fewer health care center facilities and little ability to avoid exposure. And often these folks have to travel very far for work.  They’re receiving a larger dose of air pollution.

What kind of steps is the government taking to address the issue?
With the public transport system, we have made tremendous progress. It’s easy to criticize the pace of progress, but we are moving away from very old, polluting buses. No city in the world has moved directly from 100% diesel to 100% electric. So we have to be realistic. We’re not in heaven yet, but we’ve moved from hell.

The Bogotá administration wanted to upgrade its bus fleet to what’s known as Euro5 without filter – buses that aren’t so clean.  That was a bad idea and we criticized them for that.  We said, “even if you can’t have full electric or buses that run on Compressed Natural Gas, CNG, at least have a filter.” They listened. We ended up with a system for the bus rapid transit that is 40-45% diesel with filter and the remaining 55-60 percent are CNG-vehicles. Now, the city is looking at electrifying other parts of the public transportation system. It will take time, but the progress is there.  But that’s the public transportation system. Trucking is a bigger issue.

What can you do about the trucking sector?
I was speaking with the secretary of the environment of Bogotá, and I suggested implementing non-attainment zones* for the cities, like in the US, to target industries and vehicles. You could use ecolabeling for vehicles as an incentive to push this sector to renew the old vehicle fleet, which is very dirty. And the companies are very opposed to upgrading to cleaner trucks.

Another thing we can do is use the tax system. When you buy a car, you pay a tax just to own it every year. This tax does not account for the potential emissions. We are suggesting that we adjust the tax to make it based on the pollution characteristics of the vehicle.  Of course, right now is not the best time to talk about new taxes. But, it is part of the set of alternatives.

How can you bring different groups together to address the problems with air pollution?
I just recently got a call from the Bogotá city council. They want to implement a concept that I had been suggested by my students, air quality governance. It’s a paradigm shift that asks the question, “Who is responsible for air pollution? Is it the secretary of environment, the industry, the people?”  The correct answer is everyone, so we need a system of co-management.  Pollution is not created equally and it doesn’t affect everyone equally. Someone driving a car produces more pollution than someone riding a bike, and a child under five is affected more than a young adult. But everyone, from all sectors of society, needs to be involved and do their part.