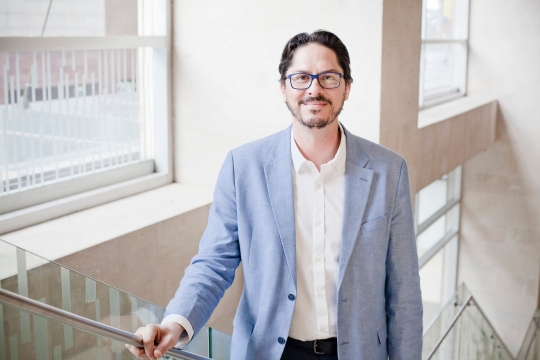 As an eco-wonderland, Costa Rica and Latin America have a staggering amount of biodiversity and many unspoiled natural wonders. Over a quarter of the land in Costa Rica is protected from potential exploitation through national parks, wildlife refuges, marine sanctuaries, national reserves, conservation areas, and biological reserves. This is the result of a considerable amount of hard work and good intentions. However, the decision-making processes that led to their formation were often not informed by research findings.

Environmental economics Professor Francisco Alpízar’s aim during his entire career as an academic in this field in Costa Rica has been to create a strong network of experts in this field, and to ensure that the country’s decision-making processes are informed by research for more sustainable development of the region.

As a young student in Costa Rica, Alpízar spent a lot of time in nature. He remembers seeing efforts being made here and there to protect nature, but quickly learned that there was limited concerted effort to create broader, effective policies based on research insights. Much of it was intuitive action championed by passionate individuals. While these do drive change, it became clear that a more careful, research-based process would be more effective and sustainable over time.

“When I started studying environmental economics, all I had in mind was how to make protected areas and conservation efforts in Costa Rica work better,” he says.

“I quickly learned that it was not only about protected areas, but that we needed a more integrated approach for resources management. This process involves not only nice things like turtles and beaches, but also bigger resource issues, like water provision for rural communities, drinking water, and irrigation in agriculture. It is also necessary to link these to how we stop pollution in our rivers. Very quickly, my mind broadened from a conservation focus to an integrated environmental economics mindset. This was my first lesson in environmental economics during my PhD at the University of Gothenburg which I completed in 2002.”

The opportunity of higher education through Sida funding allowed Alpízar to draw on two major instruments that he has found essential in his conservation and capacity building mission: environmental evaluation tools; and behavioral economics methodologies. With these, Alpízar had the opportunity to make a concrete contribution to policy design in Costa Rica, specifically within transportation and protected area management.

Based on issues identified in the Latin-American region and in Costa Rica specifically, and with the tools he acquired during his doctoral studies, Alpízar returned to his home country to work at the Tropical Agricultural Research and Higher Education Center (CATIE) in Turrialba in central Costa Rica. CATIE is an international institute known for agricultural development and biological conservation in Central America and the Caribbean.

Prior to starting his position at CATIE, Alpízar discovered that there were no environmental economists in the institution, and very few in Latin America. The region had limited capacity in this field, it was scattered around, and there was little collaboration between researchers. Alpízar had the idea of launching a capacity building program in order to create skills in environmental and development economics research in the region.

“I joined CATIE as the only environmental economist at that point. It started slowly, with just me and one student, Roger Madrigal, who is currently the EfD Central America director,” Alpízar explains.

“We shared the dream of creating a solid environmental economics think tank within CATIE. At this point I received support from Sida to start the Latin American and Caribbean Environmental Economics Program (LACEEP), a capacity building program for young researchers who wanted to progress in their careers and were eager to create a network of scholars. It is funny to look back to when we started LACEEP, we were all kids returning to our countries, joining different institutions, but it seemed like we were isolated from each other. We were scattered drops of wisdom within the region. LACEEP supported our efforts to bring capacity to the region and to connect Latin American junior researchers with the best scholars around the world.”

Parallel to this process, they established a close interaction with decision makers in Costa Rica. Alpízar and his emerging team heard the concerns and worries of the decision makers, who wanted the researchers to help them fix or improve policies, specifically relating to those designed for the payment for ecosystem service. At the time, no one was talking about payment for ecosystem services in the Global South.

Policy makers were also concerned with how to make protected areas more sustainable by allowing the benefits of protected areas to reach beyond their boundaries and into the surrounding communities. They wanted to consider landscape approaches and management of environmental resources, which was novel in itself. Work and collaboration then began with Costa Rican authorities in two specific areas: management of protected areas, and payment for ecosystem services.

Alpízar built expertise through rigorous scientific research and publications. Decision makers in the region began turning to him for advice when they faced difficult dilemmas or complicated trade-offs. As a result of their growing expertise in protected areas and ecosystem services, Alpízar and his team have worked with partners such as the World Bank, the Inter-American Development Bank, and the World Resources Institute, among others in several countries in Latin America.

Over time, it became apparent that there were two research topics that were not high on the political agenda, but crucial for society. These were water, in particular as the impacts of climate change become increasingly severe, and emissions relating to the transportation sector. For researchers in CATIE, an academic institution in a rural setting, it became obvious that the impacts of agriculture, food security, and household decision- making where problematic, but also part of the solution to a more sustainable region. These topics eventually became central to the research at CATIE, and attracted funding from the International Development Research Center, the World Bank, and others.

For Alpízar, identifying relevant research ideas was straight forward: there's a problem that decision makers are struggling with, or they are making decisions based on incorrect or unsubstantiated data. This is where he found the opportunity to contribute. It was about knocking on doors, talking to people, and showing them what type of research his team was capable of.

But to do that, the researchers needed funding and support that allowed them to spend time thinking about these fundamental problems, and interacting with decision makers. If they identified a problem that was particularly interesting and relevant to a decision maker, the research team needed to be able to deliver.

“This is where EfD played a key role in my career,” says Alpízar.

“It gave me the opportunity and the platform to be accessible to policy makers whenever they requested. One constant complaint from policy makers is that people in academia are not available, researchers are too busy, they don't have the time listen to the real-world problems facing them, and therefore no time to contribute to a solution.”

In 2007 the EfD Initiative was established with EfD Central America, EfD’s first center on the continent, with its offices in CATIE. This sent a clear message that the Environmental Economics Program within CATIE was not only growing and establishing a strong reputation, but was also becoming well connected. The dream of being part of a better and stronger network of environmental economists in Latin America was becoming a reality.

In order to remain relevant in academia, researchers must produce peer-reviewed publications. One of the goals of EfD is to support local researchers in the Global South to advance academically, while at the same time working with policy makers to achieve real-world impact. The EfD network therefore provides resources, expertise and tools to support academics with capacity building, research, and interaction with policy makers through targeted communication.

“You could see these as soft actions in a way, and yet when they are put together they make a compelling support system for a researcher, which allows us to be relevant to decision makers,” he explains.

“In a world where everyone is extremely busy, for policy makers to be able to contact a research group, agree to a meeting, and have their problem listened to with the aim of identifying a solution has made a huge difference in the interaction between academia and the policy sphere. This was all made possible because of EfD.”

Once a researcher has formulated an idea of what the policy maker needs and how they can contribute to the solution, researchers can apply themselves to bigger projects. This, according to Alpízar, is where the EfD research funding becomes crucial, because large funding opportunities allow them to craft thought-through ideas and draw up well-defined research proposals.

This is where the interaction with the EfD senior researchers is important, and the opportunity to apply for the EfD research funding has given them the chance to apply themselves to this bigger work, according to Alpízar.

Constructing a successful research unit has relied on capacity building efforts over decades, and a dedicated support team for communications and policy interaction activities. They have also benefited from access to a network of the best scholars in the world. The glue that holds it all together has been the long-term institutional support. The EfD Initiative has been able to provide all of this.

To date, few countries in the world have had as focused an effort on conservation as Costa Rica. The EfD Central America center, based at CATIE, has made important contributions to this process from the beginning.

Francisco Alpízar is the Chair and Professor of the Environmental and Natural Resource Economics Group at the Department of Social Sciences in Wageningen University and Research in the Netherlands. He sits on the EfD Research Committee and is a Senior Research Fellow at EfD Central America.