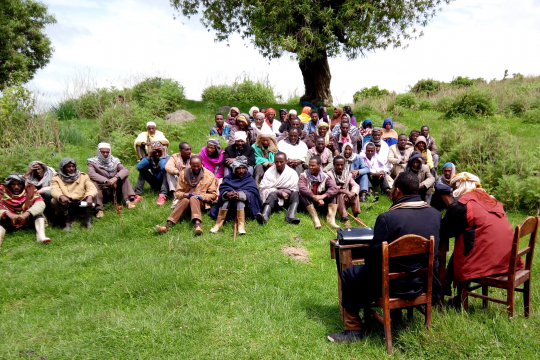 Women in forest management committees are beneficial for the economic outcome

The responsibility for forest management is increasingly being delegated to local communities in many countries. Previous research has shown that women are keener to preserve the forests. But how is the economic outcome for the community affected when women participate in the decision-making? And does it matter whether they have a formal role or just participate in the meetings?

Ethiopia is affected by deforestation and forest degradation. At the turn of the century, some 40% of the country was covered by forest. Today it’s merely a few percent. The government introduced a system of local forest governance in the 1990s where local communities were given exclusive user rights in return for a promise to manage the forest sustainably.

However, women are often excluded from the decision-making, even though they are very dependent on the forests, being responsible for putting food on the table, collecting firewood, and harvesting fruit, nuts, honey, and other provisions.

EfD researchers Goytom Abraha Kahsay, Anna Nordén, and Erwin Bulte have studied how women’s participation in the executive committees (ECs) of forest user groups in Ethiopia has affected not only the preservation and quality of forests but also the economic outcome for the local society. Those two aspects are often assumed to be incompatible.

“However, we could not see that impact from merely participating in meetings, without having a formal role in the executive committee.”

Only 14% of the groups have at least one female EC member, and only one group has three female EC members. Due to this, the effect of adding even more women could not be studied. Previous research has, however, shown that gender-balanced groups are the most efficient in conserving forests.

There are, according to Anna Nordén, many possible answers to why women’s participation in the decision-making has a positive impact on conservation as well as the economic outcome. For instance, if they participate in making the rules, they are more likely to follow them and make sure that others do that too. There is also the issue of supply and demand: If you take out fewer assets from the forest, they become more valuable.

“One important conclusion for policymakers is that it’s important to include those who are dependent on natural resources in the decision-making – then we can combine an economic development with one that is inclusive and sustainable,” comments Anna Nordén.

So what can be done to include more women in executive committees?

“That is a very complicated issue indeed. And it’s also the topic of another report that we will publish shortly,” says Anna Nordén.