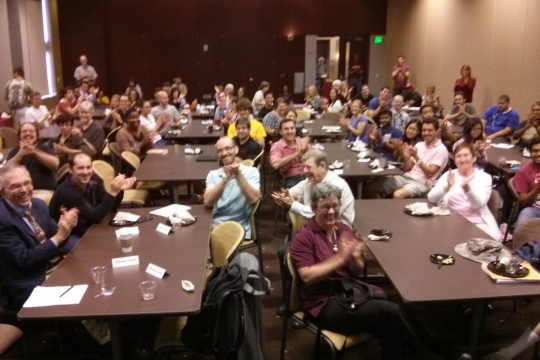 Thomas Sterner, Senior Research Fellow of EfD and Professor of Economics at Gothenburg University, visited Arizona State University in Phenix, Friday, Oct. 11 to give a public lecture on “Carbon Tax: The Way Forward”.

In his talk, Prof. Sterner discussed the benefits and feasibility of environmental fiscal reform and carbon taxation, using examples from Sweden and the US. He started his talk by an overview of the climate problem. Asked the audience if there was anyone under 37 (a majority of the audience) and then told them that none of the months they have lived has been colder than average. He showed them the likelihood that would happen by chance. "In case you don’t believe in climate change", he addressed the audience, "the chance that you just happen to get about 450 months in a row that are all “above average” temperature is like getting “even numbers” in roulette 450 times in a row – the likelihood of which has many zeros after the decimal point."

Sterner then used the Chalmers Climate Calculator to show what has to be done to keep climate change under 2 degrees – reduce emissions by 2% per year starting today – and went on to discuss which carbon prices would be necessary. He ended up talking about carbon taxes in Sweden and the USA and gasoline taxes in Europe. The photo shows the audience's reaction when Sterner asked them to show that also “Americans might applaud the idea of a gas tax!”.

Beside the public lecture, he also had an informal round-table with some of the Economists at the faculty to discuss how to inform real world decisions with economic analysis - and share experiences on how to train graduate students in environmental economics.

He also had meetings with some senior leaders at ASU in the areas of sustainability and energy and discussed collaboration when it comes to capacity building in climate economics in developing countries.

ASU introduced Prof. Thomas Sterner in the following way “a world-renowned environmental economist, who has published over a dozen books and 80 articles on environmental-policy instruments with applications to energy and climate, industry, transport economics, and resource management in developing countries. He is a recipient of the Myrdal Prize and a past president for the European Association of Environmental and Resource Economists. He currently works as Visiting Chief Economist at the Environmental Defense Fund in New York.