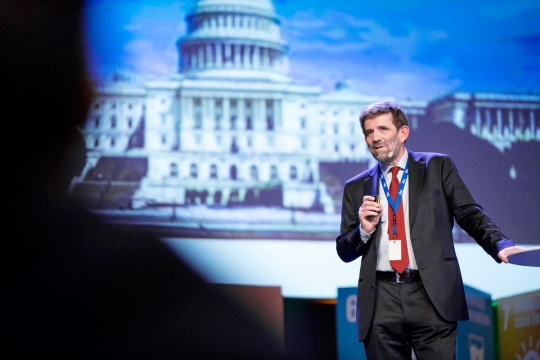 A new publication by prominent economists and lawyers argues that the current value is the “best estimate” of climate change’s costs.

Despite the Trump administration’s decision to withdraw the official estimate of the Social Cost of Carbon and disband the interagency working group that developed it, Professor Thomas Sterner and colleagues have highlighted the metric’s continued validity for policymaking. In a letter published in the journal Science, the group takes on key criticisms surrounding the metric, which quantifies the economic costs of carbon dioxide emissions and is used when assessing the costs and benefits of regulations. The letter encourages both government and private-sector analysts to continue using the interagency working group’s Social Cost of Carbon estimate.

Through an executive order issued in March, President Trump instructed federal agencies to individually monetize climate damages rather than use the existing central estimate of $50 per ton of carbon dioxide. But the Science letter forcefully argues that the existing estimates are in fact the best available, reflecting peer-reviewed scientific and economic models. The economic analyses that underlie numerous state and federal policies make use of the interagency working group’s Social Cost of Carbon, and the letter suggests that the metric remains appropriate in these contexts.

The executive order asked agencies to specifically reconsider two elements of the Social Cost of Carbon: the discount rates and domestic versus international impacts. However, the authors write that “scientists and economists widely endorse” the methodological choices made by the interagency working group.

For the discount rate—that is, the factor for converting future costs and benefits into present-day values—the working group applied values ranging from 2.5% to 5%, with a central estimate of 3%. Critics say those rates are too low, and that a higher rate, like 7%, should be used. Choosing a higher rate would place less value on avoiding future damages and impose higher costs on future generations, and a higher rate has little to no support in the economic literature or in surveys of expert economists.

Further, the authors write that the “National Academies of Sciences and the U.S. Council of Economic Advisers strongly support a 3% or lower discount rate for intergenerational effects. A 7% rate based on private capital returns is considered inappropriate because the risk profiles of climate effects differ from private investments.”

On the topic of U.S. versus non-U.S. impacts, critics argue that the estimate should not take into account damages that occur beyond U.S. borders. However, climate change is a global phenomenon. Just as U.S. emissions contribute to global damages, each ton of carbon emitted outside the United States inflicts damages on this country. Thus, the authors write that estimating the global damages of U.S. emissions reinforces “reciprocal climate policies in other countries.” Additionally, the authors note that “current models cannot accurately estimate a domestic-only share of the social cost of greenhouse gases.”

While the letter clearly states that the “social cost of greenhouse gases should be regularly updated, especially to reflect the latest evidence about damage functions,” the authors argue that the government and private sector should continue using the working group’s central estimate “with confidence that it is still the best estimate of the social cost of greenhouse gases.”