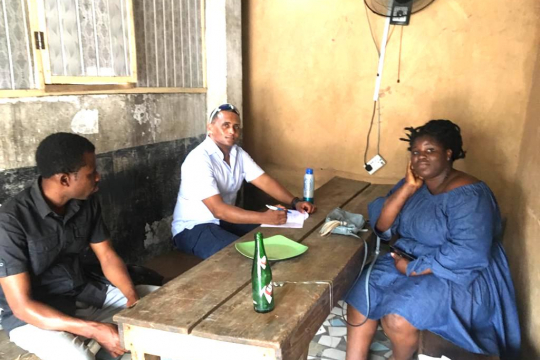 Previous studies on energy use in Sub-Saharan Africa have focused almost entirely on households. Hardly any attention has been paid to small enterprises. EfD researcher Yonas Alem, together with colleagues at EfD Nigeria will fill that knowledge gap by leading a large-scale study in Nigeria, supported by the World Bank.

Biomass fuel (mostly charcoal and firewood) is used widely to meet cooking needs in Africa. Not only it is inefficient, but also leads to deforestation, contributes to climate change, and the air pollution from burning it causes 3.1 million premature deaths in the world every year.

Enterprises consume about 50% of the biomass

Several studies have been conducted to find out what it would take to make households shift from using biomass to more environmental-friendly alternatives. But not many have addressed enterprises before, according to Yonas Alem.

Micro, small and medium-scale enterprises (MSMEs), constitute more than 95% of the businesses in Sub-Saharan Africa and consume nearly half of the total biomass fuel.

“That’s a shocking reality. So, by just addressing the households we fail to address half of the consumption and in addition make more biomass fuel available for firms”, says Yonas Alem.

In the fact-finding phase of the study, MSMEs will be interviewed about their charcoal use and what it would take to make them switch to other cleaner alternatives.

Then about 1,000 firms will get an offer to buy LPG (liquefied petroleum gas) stoves and solar systems with a credit offer of paying back over several months.

Solar power instead of diesel

“That means that they have an initial investment, but it’s spread out over a longer time, than if they would have to pay for it upfront. And in the long run, they will save money since the modern appliances are more efficient,” says Yonas Alem.

“In addition, many of those firms have diesel generators as back-up for electric power failures. These generators emit a significant amount of harmful smoke. What does it take to make them shift to solar panels instead? Imagine the impact of such a shift!”

The research team will examine what impact a down-payment option would have, and it will also study effects on deforestation and air pollution as well as the impact on the enterprises’ profitability.

“I’m really excited about this project. It combines so many of the EfD research themes – energy, climate change, forestry, agriculture, health, green technology, and policy design. The findings from this study will of course not only be applicable for Nigeria but most countries in the Global South.”

The lion's share of this extensive project is financed by the World Bank and the rest by EfD.