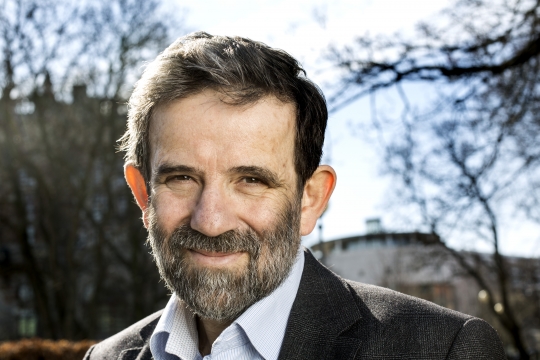 Despite climate change, most polluters still pay little or nothing when they release carbon dioxide into the atmosphere. 'A cost of SEK 1, or about USD 0.15, per kilo CO2 would be enough to solve the whole climate change problem,’ says Thomas Sterner, professor of environment economics at the University of Gothenburg.  Sterner is the only Swedish researcher to serve as a coordinating lead author in Working Group III on measures to combat climate change that the Intergovernmental Panel on Climate Change (IPCC) will present on Sunday 13 April.

Compared with the last assessment in 2007, many countries now have ministries in charge of climate issues. Numerous measures to combat climate change have also been introduced, many of which the authors of the report have been able to evaluate. The scientists’ summary for politicians will be finalised and presented in Berlin next week.

‘We have explored the new policy instruments introduced around the World. Some of my colleagues have felt very enthusiastic – rather like botanists discovering new species. I am not equally optimistic because most of the new instruments are too weak to be meaningful. What we need to avoid dangerous climate change is the application of strong policy instruments,’ says Sterner.

One potentially strong policy instrument according to the report is to make emitters of CO2 pay a price in relation to the amount emitted – but it all hinges on this price being sufficiently high. In most countries, there is virtually no cost to emitting CO2 and other greenhouse gases. At the same time, studies from for example the International Energy Agency show that if a sufficiently high emission tax of SEK 1 (about USD 0.15) per kilo CO2 (or an equivalent permit trading scheme) were introduced in all sectors across the world, the total emissions could be reduced by half by 2050. The difficulty, however, lies in establishing sufficiently strong international agreements.

Another effective intervention identified in the report is to stimulate research on new technologies. One dilemma, says Sterner, is that companies know they will have problems patenting new environmentally friendly technologies. This realisation of course affects their motivation negatively, implying that they will not do enough research and therefore there is a need also for state-funded research.

Today, CO2 taxes are relatively unusual being limited mainly to a few countries in northern Europe. Sectoral taxes – on transport fuels are more common and have been shown to have very significant effects. On the other hand, many countries are in fact still subsidising fossil fuels. Sterner says that one important policy instrument would be to remove these subsidies. The measures discussed in the report also include voluntary agreements.

‘I really don’t believe in voluntary measures since they imply letting business and industry do as they please. Overall, I feel that our report may come across as too modest compared with the report from Working Group I, which was presented last autumn and described the climate situation in the world as catastrophic. But there are indeed real opportunities to limit the emissions,’ says Sterner.

On 13 April, the UN climate panel Intergovernmental Panel on Climate Change (IPCC) will present a new report focusing on measures to reduce or prevent emissions of greenhouse gases. Thomas Sterner, professor at the University of Gothenburg, is Coordinating Lead Author of Chapter 15: National and Sub-national Policy Instruments. The latest assessment of climate change (Assessment Report 5, AR5) consists of four parts. The third (Working Group III) will be finalised in Berlin 7-12 April for approval by IPCC before a summary report for policy makers will be presented at a press conference on April 13.

The researchers are not allowed to be policy prescriptive, but are of course expected to be policy relevant – and for instance to identify which measures are necessary in order to achieve the so-called 2-degree target – an internationally established goal of limiting the global warming to 2 degrees Celsius by 2050 compared with preindustrial levels. According to the IPCC achievement of this goal will require rapid and substantial emissions reductions. The UN member states established the target jointly in 1996. The target has also been adopted as a policy target by Sweden and the EU.

Thomas Sterner is professor of Environmental Economics at the University of Gothenburg, Department of Economics. He specialises in policy instruments for environmental management with applications within the fields of energy and the climate, industry, transport economics and resource management in developing countries.

In 2012-2013, Sterner served as Visiting Chief Economist at the Environmental Defense Fund in New York. He is a board member and one of the founders of the Environment for Development Initiative www.efdinitiative.org, a capacity building programme in environmental economics focusing on developing countries. Sterner is also a member of several other networks and boards for developing countries, including CEEPA (Africa), SANDEE (South Asia) and the Center for Chinese Agricultural Policy, CCAP, under the Chinese Academy of Sciences.