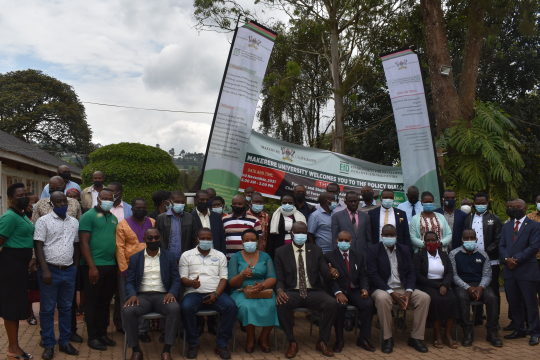 Government officials learned about the importance of forests and biodiversity

Over 50 officials from the Kabale district government were made aware of the need to protect the environment for sustainable livelihoods and future generations. This happened in a policy dialogue:  Forestry and Biodiversity: Addressing the challenges of Forest Degradation and enhancing Environment Management in Uganda.

The meeting, organized by the EfD-Mak Centre Uganda on November 3rd, 2021, attracted participants from government ministries and agencies, NGOs, the private sector, politicians, the environmental police, civil society organizations, and members of the academia from Kabale and Makerere University.

Want to interact with stakeholders

Kabale is a unique part of the country because of its landscape. It has a high population mostly residing on steep slopes. Since food is prioritized for households, the environment has been encroached on including fragile ecosystems.

“The steep slopes result into landslides and flooding in the valleys, and therefore we wanted to interact with stakeholders including policymakers, district leaders, those practicing conservation of the environment like tree planters, to remind them of the benefits of the environment, its conservation, and what we gain when we conserve it”, The Deputy Director EfD-Mak Center Prof. Johnny Prof. Mugisha explained.

People in Kabale used to grow the bush beans (short beans) until they became unproductive and replaced them with high-yielding climbing beans. These require a smaller area and need to be staked with sticks from trees. Not every household has access to trees to get sticks from and some encroach on other people's trees and carelessly cut the branches.

The district chairman Nelson Nshangabasheija thanked Makerere University for initiating the program to discuss how the district can protect the natural resources.

Kabale is the worst hit in the region

“The challenge here is the waragi and soft drink factories near lakes and rivers. These factories are damaging our natural resources.  As political heads in the district, we are trying to see how we relocate the factories to protect the natural resources”, Nelson Nshangabasheija said.

He said to reduce soil erosion, the district is considering a bye-law compelling the population to plant at least three trees for one tree cut down.

“About 90% of the wetlands in Kabale have been depleted and there is no intact wetland in the district. All wetlands were cultivated. Rivers have been encroached on and people are dumping soil. When you go to the site for law enforcement, people threaten us. The encroachers are protected by politicians making it difficult to execute our work”, Kyomukama said.

Sam Kyomukama also reported that other districts were being threatened by deforestation to provide charcoal for cooking and that all river banks in Kabale have been encroached on by agricultural activities resulting in power blackouts when it rains as power has to be switched off to remove the silt from the Maziba dam.

“In addition, the mushrooming factories of soft drinks including Babababa, Numi, Entare, and waragi (alcohol) brewing in wetlands divert rivers to work as coolants. They use molasses which dries out the grass. The chemicals enter the rivers, rusting the Maziba dam and killing mudfish and frogs in the rivers. We are in touch with the Kabale District Police Commander and we will storm, arrest and arraign culprits in courts of law,” the police officer warned.

The Kabale district Forestry Officer Benjamin Ario said, that in the Kabale district due to population explosion, infrastructural development, and weak policies regarding wetland use, biodiversity and forestry have been greatly affected.

“There are changes in rain seasons, the dry spell goes to April yet April and September used to be rain seasons,” he said.

More examples: The hardwood tree black wattle, which takes up to 35 years to mature, is threatened because it's good for charcoal and firewood. Mammals are getting extinct due to uncontrolled human activities within the district.

It was noted that Uganda has very nice legislation and institutions in terms of environmental conservation and protection. The biggest challenges are the view of Natural resources as public and free goods, non-valuation (price) of these environmental goods, poor implementation of the laws, corruption, and inadequate capacity and facilitation to aid the implementation.

The suggested solutions include; Awareness raising among the locals and those in authority on the need to protect the environment, increased budgetary allocation to the environmental police protection unit and other local government entities, punitive punishment to environmental degrades, and introduction of other non-climbing varieties of beans.