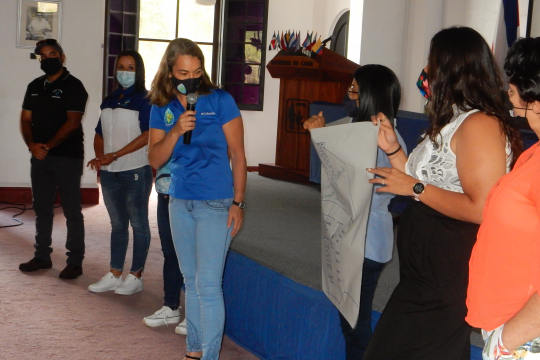 In Costa Rica, Water Community Organizations (WCO) play a key role in providing water for about 1,5 million people, which represents nearly 30% of the population of the country. To support the WCOs, and strengthen their interaction, EfD Central America organized a meeting with representatives from the seven provinces of Costa Rica, and water supply unions, leagues, and federations.

EfD research fellow Bárbara Viguera has coordinated a project titled Accountability, Use of Technology and Citizen Participation for the Improvement of Water Services in Vulnerable Communities in Costa Rica (WAPP), since 2020. This project is funded by the Central American Regional Security Initiative (CARSI), from the United States Embassy in Costa Rica.

"The purposes of the meeting were to discuss the social value of the water management done by community organizations, and the relevance of networking, as well as to share innovative tools," she explained.

In Costa Rica and in other Latin American countries, WCOs are second level non-profit organizations managed by people from the communities and ruled by a board of members.

"They have the responsibility to withdraw and manage water to provide the service to people in the community," explained Róger Madrigal, EfD Central America Director.

Guillermo Barrantes, a member of the Board of the Santa Rosa water organization, and president of the Union of WCO from Turrialba and Jiménez (UNATAJI) mentioned that the event was enriching and useful because they got to meet representatives from other rural aqueducts united in federations, leagues, or unions.

He said that through the event they could understand that if the WCOs are united, they can have more policy impact, for instance in the new Congress of Costa Rica, in government entities such as the Costa Rican Institute of Water and Sewerage (AyA, by its Spanish acronym), and in processes that involve the creation of new laws related to water for human consumption.

"I think that can help us participate in discussions with more authority, and better speak for the advantages of the WCOs," he said.

About the event
The event titled The value of the associativity and the water community management: advances, reflections, and synergies to strengthen the community aqueducts, and the federations, leagues, and unions was organized by EfD Central America on February 3 and 4, hosted at the Tropical Agricultural Research and Higher Education Center (CATIE), with the support of the National Confederation of Federations, Leagues, and Unions of Community Aqueducts (CONAFLU), as part of the WAPP project, financed by CARSI, of the USA Embassy in Costa Rica.