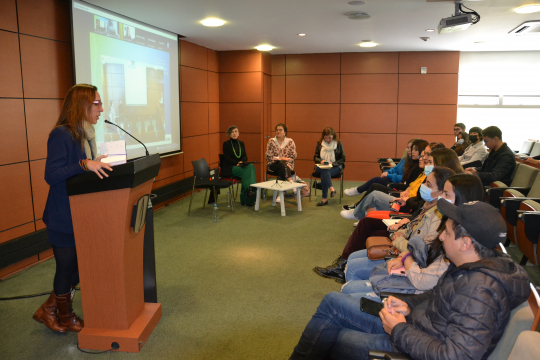 Beginning of the exposition by panelists. Photo: Dept of Economics UniAndes.

This discussion took place during the Interamerican Development Bank’s five-day long event held under the theme: Week of Knowledge. The discussion covered gender and diversity issues and its organization had the support of the Department of Economics at UniAndes, MIA UniAndes, and WinEED. Professor Lori Beaman from Northwestern University also delivered a master a class titled “Labor Markets through the Gender Lens: a New Vision to an Old Problem”. María del Pilar López, WinEED leader and EfD Colombia researcher moderated the panel.

Lori Beaman, Associate Professor at Northwestern University, disclosed during her master class that before the pandemic, statistics show that there are few countries where female labor participation is high. When comparing the number of women in high working positions in business and politics, statistics indicate that women constitute more than 50 percent of parliamentarians in Europe, while the same region scores lower on female representation in the private sector.

This raises the question of what kind of policies may change this situation. Some examples of public policies include the public provision of child-care, flexible work schedules, and fatherhood licenses. Flexible work schedules facilitate for women to develop all their tasks including their professional job.

Professor Beaman challenged participants to think about how gender norms around unpaid jobs can be changed. She further highlighted segregation in occupation. For example, in Italy most of the labor force in the service sector is female and wages in this sector are lower on average.

Many reasons for lower workforce participation

Ana Maria Diaz, Associate Professor at Universidad Javeriana in Bogotá, underscored the structural causes of the lack of female labor participation. Role segregation at home is a key barrier because it makes women have a higher domestic and care workload.  This role segregation corresponds to social norms, limited access to sources of employment (women search for work opportunities differently than men), individual preferences, lack of legislation with a gender perspective, lack of good quality childcare services, the spatial structure of the home (how far the home is from the workplace, how polluted is the environment where the home is, other factors).  She emphasized the need for research to measure the effects of social norms on role segregation with the purpose to formulate public policies that change these models in a shorter time.

Karen Garcia, Professor at the national institution for statistics in Colombia (DANE in Spanish), stated that in 42 percent of the couples formed by a woman and a man in Colombia only the man is in the workforce while the woman is not. In 30 percent of these couples, both the man and the woman are in the workforce. She commented that Colombian statistics show that there is a relation between stereotypes and decision-making in the household: when couples agree that the head of the house is the man, then the man decides if he works for a wage or not.

Natalia Cantet, Associate Professor at University EAFIT, mentioned that economics of care and gender norms are barriers to women's participation in labor markets. Studies show that female participation in labor markets increases when children start earlier school. Also, when women have the autonomy to decide their own income, they work more hours.

When young girls have women mentors and learn about women who have overcome adversity, their scores in math improve. It has also been proved that women who receive education have fewer children in the long run and they work more. Also, there is more time between each child, which allows women to participate in the labor market.

Daniela Plaza, a student at the economics department at Universidad de los Andes and a member of MIA (a group of students at the Dept of Economics at Uniandes that promotes the empowerment and leadership of women students in economics) stated that she observed that women and men students have the same opportunities. However, she has noticed that professors and teaching assistants are mainly men at the Dept of Economics at Universidad de los Andes.