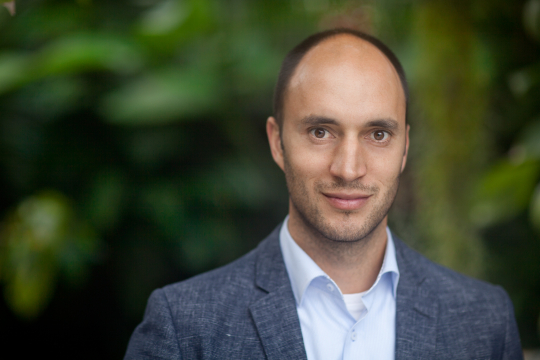 What do Prince Charles and Leonardo DiCaprio have in common? At least one thing: the Royal Botanical Gardens, Kew. Meet its Director of Science, Alexandre Antonelli, a man passionate about biodiversity and fighting climate change, and one of the brilliant key-note speakers at EfD's Annual Meeting!

Tell me about your work!

The Royal Botanical Gardens, Kew in London is much more than a garden. It's also one of the world's largest and most active research institutions on plants and fungi. Some 350 science staff collaborate with partners in more than 100 countries.

I'm responsible for Kew’s overall research and collections. Our research aims at understanding, protecting, and sustainably using biodiversity for the benefit of people and all life on Earth. We recently published our science strategy that you can find on our website! It's a plan to help stop biodiversity loss and discover sustainable nature-based solutions to some of the biggest global challenges.

Why did you want to work at Kew specifically?

It's a Mecca for everyone interested in biodiversity. I was excited about the opportunity to influence the direction of such a great organization. I am born and raised in Brazil and have seen the effects of environmental problems first-hand. Working here means having the opportunity to do something that has an impact.

What are the most exciting aspects of your work?

That's meeting people from different backgrounds with different perspectives on the complex problems that we are addressing. To listen and learn what they see as their toughest challenges and find intersections where our research and data can help solve problems.

What are some of the toughest challenges?

Sometimes governments spend billions on social projects without paying attention to the natural resources that people depend on. Such projects are seldom successful. But projects that only aim at saving the environment, and fail to consider social aspects are no better. Environmental measures have great social benefits if you do it right. It shouldn't be "either-or" and our work at Kew is trying to demonstrate that.

Are there some issues that you are especially passionate about?

The escalating loss of biodiversity around the world. I am concerned about initiatives to plant enormous amounts of trees without understanding the consequences if they do it the wrong way. It happens in several countries that usually have no say in the matter. It's a new type of colonialism.

Wrongly planted forests can cause problems with the groundwater, with monocultures that won't survive, with invasive species, and much more. If you plant forests, you need to take care of them so they don't die, otherwise, they will emit CO2 instead of storing it. We’ve therefore published the Ten Golden Rules for reforestation to provide concrete advice based on the best available evidence.

What are you most proud of in your career?

I think I may have inspired many people to work towards common goals. My colleagues at Kew contribute greatly to spreading knowledge on the importance of biodiversity. On October 13 we published the “Kew declaration on reforestation for biodiversity, carbon capture, and livelihoods”. It's been signed by thousands of people in 114 countries, and by over 400 organizations. According to this manifesto, hundreds of millions of trees will be planted according to the Ten Golden Rules.

Tell me about Prince Charles' role as patron of Kew!

He is very interested in biodiversity and he helps us get in contact with influential stakeholders. He brought, for instance, recently 15 CEOs from very large corporations, and the President and Minister for the Environment of Gabon to discuss climate change and biodiversity with us. They were all very eager to learn more about research. Those companies have a great influence on society. Sometimes you can achieve much faster progress working with businesses than with legislation.

What is your relationship to environmental economics?

I have, for instance, worked with EfD's Professor Thomas Sterner on a project that involves AI and big sets of data to support the management of the environment, to protect economic, social, and biological values. I would love to expand this and other collaborations in environmental economics as I strongly believe that our disciplines are highly complementary.

What will you talk about at the Annual Meeting?

I will talk about Kew's and my work with biological, social, and economic aspects of sustainable development. One part of that is a program called TIPAs (Tropical Important Plant Areas). I am looking forwards to this very much. And we are interested in finding more partners to join forces with.

And finally, how is Leonardo DiCaprio involved with Kew?

The government in Cameroon had decided to let a large, highly biodiverse forest – Ebo –  for development, which would affect many unique plants and animals. We started a campaign against that and Leonardo DiCaprio was involved in it. Eventually, this work and the biodiversity evidence we provided led the government to revert its decision and save the forest.