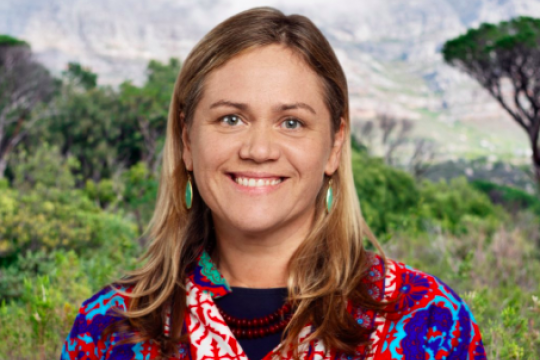 Cape Town made international news during the three-year drought which threatened to shut down the city’s water supply at the height of the crisis in January 2018. During this time, a team of behavioural economists from the University Cape Town (UCT) worked closely with the city to test how a series of green ‘nudging’ tools and other economic instruments could get Capetonians to adopt more water-wise behaviour, and ease pressure on the city’s over-stretched municipal dams.

Last week behavioural economist Prof Martine Visser, director of UCT’s Environmental Policy Research Unit (EPRU) and lead researcher on this project, scooped a prestigious National Science and Technology Forum (NSTF) prize for ongoing research into how her discipline could contribute towards getting people to adopt more pro-social behaviour in relation to  water, particularly in resource-constrained contexts.

Visser received the NSTF-Water Research Commission (WRC) Award last Thursday, which recognises work by an individual or organisation which has contributed towards ‘achieving sustainable water management, knowledge generation and solutions over the last five to 10 years’.

Visser’s research in this field has explored how various behavioural ‘nudging' tools and empowering communication strategies, along with technology such as smart water meters installed in homes or schools, can influence people’s water use. The work also involved collaborating with city and province-level officials and politicians, to build capacity within government institutions in order to support them to manage water resource use within their constituencies.

The lessons learned from this research apply to other municipalities in the Global South, says Visser, as many face the twin challenges of population growth and resource constraints, particularly as climate change increases the likelihood of extreme weather events like the kind of drought which hit southern Africa between 2015 and 2018.

The early stages of the research involved working with the city’s utility department to run a series of ‘green nudging’ experiments to see how positively-framed behaviour-change messages could urge residents to be more water-wise. How people responded to these messages was later compared with the city’s other water-saving methods such as price increases, water restrictions, and fines for those breaking water restrictions.

During the peak of the drought, as the city was gearing up to implement the most severe emergency water rationing measures, Visser and her team helped the City of Cape Town design a ‘Water Map’ to encourage panicked residents to act in a more pro-social way in terms of the shared common good that water is. The digital tool, which was rolled out through part of the summer of 2017 and 2018, was designed to use social recognition as a way to get people to voluntarily reduce their water use.

Another area of Visser’s focus was to work with Stellenbosch University, the Western Cape Government, and private donors to drive water conservation for schools in the Western Cape, to see how daily water use information given by smart water meters could influence a school’s water management. This competition-based initiative between participating schools produced significant water cuts and savings in their utility bills.

UCT nominated Visser for the award because of how the research contributed to the WRC's mandate to explore ‘relevant water research studies and provide both strategic and facilitatory leadership for water technology transfer and innovation’.

The WRC has been pioneering the use of behavioural nudges in the water space, as a 'non-coercive approach to bring about significant changes for the long term', says the WRC's water use and waste management executive manager Jay Bhagwan.

'Together with EPRU, the area has evolved from research to application. The ultimate goal is to empower and institutionalise local government to mainstream behavioural nuding as one of the key approaches to influence long term behaviour change on water use and conservation.'

Visser was supported in her research by EPRU’s broader team of behavioural economists, including Samantha De Martino, Kerri Brick, Johanna Brühl, Megan McLaren, and Kenneth Berger, and electrical engineer Prof Thinus Booysen from Stellenbosch University. The research was funded by the WRC, with additional support from the City of Cape Town and SANCOOP.

Visser is the director of the Environmental Policy Research Unit, a regional centre of the Sweden-based Environment for Development (EfD) initiative. She is also a professor of economics at UCT’s School of Economics and the research chair of the African Climate Development Initiative (ACDI) based at UCT.