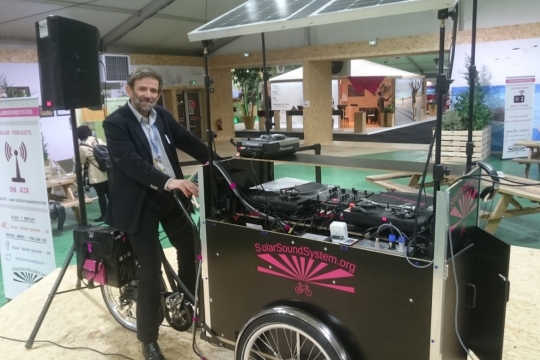 Today I was feeling confident that I had my badge and knew my way around the COP21. In the afternoon I was first working with two colleagues from Gothenburg (Åsa Löfgren and Wolfgang Habla). Then I was at the Ecole de Mines – one of the great engineering schools.

A colleague and friend (Mathieu Glachant) had a student (Damien Dussaux) who defended his thesis and I chaired the committee. The thesis had interesting papers on why Sweden imports so much waste (for incineration) and on the Porter Hypothesis (no support found). The school had a magnificent painting in the roof of a beautiful angel dancing in the sky with the faculty of teachers (Anno 1800 or thereabouts) looking down on the students.

After the defense I rushed to the RER and got to Le Bourget a little late, very luckily a colleague (Franch Lecocq) saw me and showed me where I was supposed to be – more than a mile away in the public part of the COP21 where you do not need official accreditation. This is called “Les espace Générations Climat” (Climate Generation areas) and was a little bit more “informal”.  This was also the alternative scene where you could pedal a bicycle to charge your cell phone, or in fact even a whole sound system (that could run on either solar or pedal power)

The third day of the COP was summarized in the French papers today with a number of interesting headlines. It was a day dedicated to resilience of ecosystems and adaptation. There is an alliance of a hundred resilient cities that is also meeting in Paris now and Paris was the first to contribute one million Euro to their joint work. They have pledged to spend up to 10% of their budgets on adaptation. There were art exhibitions and there was a seminar on divestment. The divestment movement including 350.org has got 500 institutions, representing a total of 3 200 Billion Euro to divest completely of all fossil fuels. This is a big increase compared to a year ago when it was 180 institutions with 50 Billion. There was a seminar on distribution showing that 50% of emissions come from the 10% richest (I don’t think we need to worry too much about carbon taxes being regressive). Finally I saw one on transport decarbonisation. I never heard so much about this in the US and thought maybe it was just Sweden but I now see that complete decarbonisation of the transport sector is spreading at least as a topic of seminars.

Maybe the only area where I did not see too much was on reducing emissions. There is a risk that all the attention to other issues implies this gets lost and since it is the most difficult - that is understandable but clearly it is also the most important! Fabius – the French prime minister who presides the COP is impatient and signaling that things must speed up.

Turning to the bigger picture I read today that the EU retained its formal position that any global climate deal to be reached in Paris next week should be legally binding, while acknowledging that it was "looking for solutions" with negotiating partners. One of the central obstacles to a deal is that the US delegation will not accept legally binding greenhouse gas (GHG) mitigation targets as it knows congress would not ratify any agreement that imposes such a requirement. Despite this the EU has not yet formally changed its position to compromise on the issue, although representatives of the EU delegation today acknowledged that a strong deal could still be achieved without legally binding targets. Hopefully the US also wants an agreement that actually countries do respect – it may partly be a matter of finding the right words since “legally binding” will automatically trigger counterproductive action by Congress.

Meanwhile I read that the gasoline prices are the lowest in a long time in the US so there is still much to do.