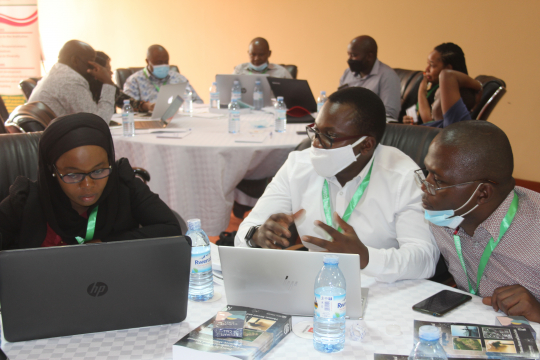 How can you create economic incentives for a sustainable society? Which instruments work and how do you protect vulnerable groups? Researchers from the University of Gothenburg as well as officials, decision-makers, and researchers from five East African countries discussed this during a 3-day workshop in Uganda in November.

Using charcoal and firewood for cooking and heating homes is very common in Africa. But it leads to deforestation, carbon dioxide emissions, and life-threatening indoor air. As part of the transition to a greener society, Kenya banned the production of charcoal for households. However, this led to an increase in imports from Uganda. Tanzania chose instead to introduce a tax on charcoal but had difficulty implementing the tax as much of the sales take place in the informal sector.

This example illustrates how difficult it can be to find the right policy instruments, how important it is to think about the consequences, and to coordinate between countries.

The workshop is part of the Inclusive Green Economy in Practice program, which is aimed at senior officials and decision-makers at ministries in five countries: Ethiopia, Kenya, Rwanda, Tanzania, and Uganda. The program is organized by Environment for Development (EfD) and the Gothenburg Center for Sustainable Development (GMV) at the University of Gothenburg and is funded by Sida.

The 26 officials participating in the first round of the program have met for a year, mostly digitally, to learn more about economic instruments for a green economy and to exchange knowledge and experiences with each other. During the workshop in Uganda, the participants came together for the first time. Prior to this meeting, they had, together with researchers in each country, reviewed the countries' strategies for the green economy with a focus on four areas: agriculture, energy, forestry, and urban development.

"It was a very exciting conversation," says Daniel Slunge, one of the researchers at EfD who was on-site in Uganda for the workshop.

"We let the participants from a country review the strategy and instruments for a green economy in a neighboring country, inspired by the OECD's so-called peer learning reviews. It became clear that the countries in East Africa have many challenges in common, but in several cases, they have chosen different instruments," he says.

During the workshop, it became clear that more knowledge is needed about how different instruments work and that collaboration between researchers and officials, and decision-makers can add a lot.

"Roll up the sleeves"

Maris Wanyera from Uganda's Ministry of Finance is one of the participants. She urged researchers not to just sit on the sidelines and criticize. Instead, she invited them to "roll up their sleeves and get into the kitchen." Richard Mulwa, researcher and director at EfD's center in Kenya, replied that "we would like to contribute our knowledge, but then you must also open the kitchen door".

The IGE program has now been running for one year. Next year, a new group of participants will undergo the program, while the current ones will remain as a support and alumni network for continued knowledge and experience exchange.

Must be perceived as fair

The IGE program will begin next year with a survey among the population in each country to gain more knowledge about what people think about various instruments such as regulations, bans, taxes, and subsidies.

The corresponding questionnaire will also be sent to stakeholders such as business organizations, trade unions, and environmental organizations. The "I" in IGE, which stands for Inclusive, means that environmental policies must be perceived as acceptable and fair, not just achieve the set environmental goals. Next year's participants will have these survey responses as a starting point and focus areas for them will be forests, plastics, and carbon dioxide emissions.

Hope to spread the concept

However, it is a worrying situation in several of the East African countries and many major concerns can overshadow important sustainability issues.

Five to six officials per country, will they be able to make a difference in practice?

"We hope that the collaboration with high-ranking officials in important ministries will lead to better use of different instruments. Although we hope that it will lead to many and large rings on the water, it is of course a limited effort given the great sustainability challenges that exist in these countries. We work simultaneously to strengthen our colleagues within the academy to develop research and master's programs with a focus on environmental economics. In this way, the decision-makers of the future in East Africa can gain the knowledge required to handle the sustainability challenges better," says Daniel Slunge.

Facts, the Inclusive Green Economy (IGE) program
Environment (EfD) and the Gothenburg Center for Sustainable Development (GMV) at the University of Gothenburg collaborate in this comprehensive program for capacity development in East Africa. The program aims to strengthen ministries and administrations in the work for a green, inclusive society (Inclusive Green Economy, IGE). The program consists of five parts:
* Training-of-trainers, tools for training their colleagues
* Knowledge exchange between countries on IGE reforms
* Individual project work
* Understanding of how to create social acceptance for IGE reforms
* Program management, digital learning and communication
The program is funded by Sida.
IGE program website