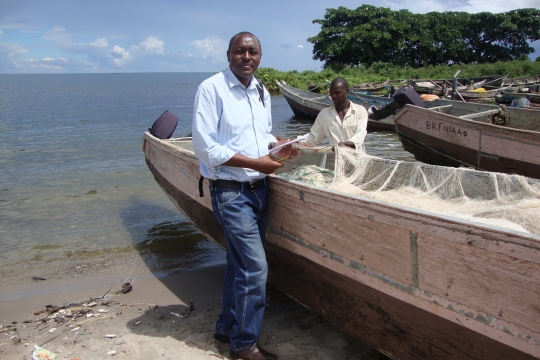 A child was killed by bees, and the fish did not survive. These were two sad outcomes of the investments in beehives and fishponds as alternative income sources for fishermen in marine protected areas in Tanzania. Field observations by EfD researchers were reported directly to policy makers at an experts’ policy meeting in 2012. An EfD review of how the country´s most important policy documents are addressing sustainable growth and poverty reduction will be presented at the dissemination workshop scheduled for January, 2013.

"We are fishermen by tradition. Beekeeping is not our area," said fishermen in one of Tanzania´s marine protected areas to EfD Tanzania researcher Stephen Kirama when he visited the park with his research colleagues.

"An important finding from the field is that we need to better address how to associate sustainability with poverty reduction. By talking with fishermen, we realize how enforcement of the restrictions in marine protected areas affects fishermen´s livelihood, and why they are so angry with the management of protected areas," says Kirama (left), interviewing a fisherman along the shores of Lake Victoria in Rubafu Village about how environmental natural resources can be used to generate income at the household level.

Fishermen are prevented from fishing in their traditional areas, and are supposed to fish on deep waters instead. Also, there are restrictions regarding the types of fishing gear, for example concerning mesh size of fishing nets.

Enforcement should come with a fair exchange to legal gear

"Enforcement of restrictions, like confiscation of fishing gear, should come with a fair exchange to legal gear. Fishermen are aware that restrictions are there for environmental purposes. The problem is that they still lack legal fishing gear, appropriate boats, and engines for deep sea fishing," says Kirama.

He explains that while some fishermen have received fishing nets and boats from the government through the marine management programme, others have had their equipment confiscated. The limited funds for providing legal equipment have been used for those who heeded the call to form groups.

"The key point is that the wider population is lacking the knowledge that environmental sustainability can increase productivity, harvest, and income, and alleviate poverty. If people can see these links, they will understand that they are right now jeopardizing their own present and future," says Kirama.

"Our observations in the field revealed that the fertilizer subsidy voucher covers only a quarter of the costs, since the price of fertilizer has gone up. Moreover, subsidies are either not delivered to farmers, or they are delivered too late. They are not used as intended for maize and rice, and farmers are selling them instead of using them on their own land. In addition, the quality is not good. Our recommendation is to increase both the quality and the fertilizer subsidy value,"
says Aloyce Hepelwa (left), here together with Stephen Kirama.

Years of high quality research has brought EfD Tanzania to a new level of research policy interaction, according to Kirama and Hepelwa. The research in recent years on marine protected areas, periurban forests, REDD mitigation, and agriculture has been particularly important.

Now the government can approach EfD Tanzania directly rather than going through the Department of Economics as it has done in the past. One example is the assignment that EfD Tanzania received from the President’s Office, Planning Commission, to analyze how policy documents in different sectors of the economy are addressing linkages between environmental sustainability, growth, and poverty, and to point out what is lacking. The report from sectors such as natural resources, agriculture, fishery, forestry, minerals, and energy will be presented at the dissemination workshop scheduled for January, 2013.

"EfD Tanzania is conducting research that results in important information with policy implications. Yet, this will not help anyone if the findings are not communicated. So this is why the Planning Commission decided to fund our outreach in 2012, through an experts’ policy meeting on forest and fisheries management, and through policy briefs that we are now finishing," says Kirama. The meeting was held in May 2012.

"We must orient our research on current problems"

When asked about successful ways for researchers to approach policy, Kirama and Hepelwa do not hesitate:

"It is important to bring research to the areas that are the topics of the day and that are relevant to the problems facing our country. We must orient our research on current problems of Tanzania, invite policy makers, and make sure that our research is up to date and relevant for the policy issues of the moment."

An equally important element for success, underlined by Kirama and Hepelwa, is that key players in the country´s decision making are members of EfD Tanzania’s policy board (click to read more).

For example, the Chairman of the EfD policy board is Mr. Amon Manyama, Assistant Resident Representative at the United Nations Development Program (UNDP). In this initiative, EfD Tanzania is undertaking a number of research and consultative works on the areas on Poverty Environmental Indicators; Public Expenditure Reviews on Environment and Local based ecosystems solutions. In addition, EfD Tanzania has also received some funding to facilitate dissemination in the areas of marine, fishery, forest and agriculture.