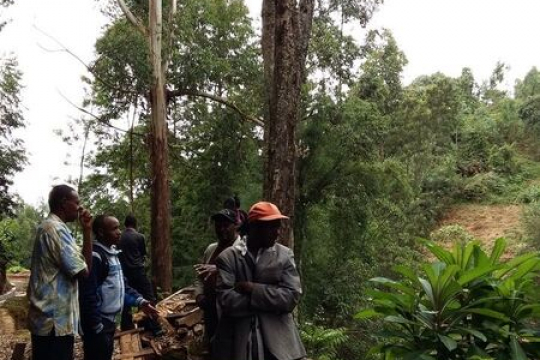 Small-scale, community-managed hydro power schemes in remote rural Kenya function well if they are run by strong leaders, and have firm rules for how the scheme should be managed. When members of the mini-grid system know they will be disconnected from the grid for breaking those rules, they tend to cooperate more willingly.

This is one of the findings of environmental economist Mary Karumba, who studied the governing rules and managing bodies of several small hydro-electricity schemes in her home country, as part of her doctoral research done through the University of Cape Town’s Environmental Policy Research Unit (EPRU) at the School of Economics.

‘Many parts of Kenya are ideal for micro-hydro schemes,’ explains Karumba, ‘especially in remote rural areas where it is too expensive, or too technically difficult to connect a community to the national electrical grid.’

Small 30 kilowatt-or-less hydro schemes can meet the basic energy needs of a community fairly easily, Karumba’s research shows. This allows a number of households to connect to a mini-grid in order to power lighting, charge mobile phones, and power small electrical devices like televisions or radios. The schemes aren’t powerful enough for heavier appliances such as irons, stoves, or hot water cylinders.

There are about 38 such schemes around the country which are either operational, or are in the process of being installed.

However, how well these community schemes work once they are operational, depends on the levels of cooperation within the community, the strength of the rules which the community agrees upon for managing the scheme, the implementation of those rules, and the competence of the leadership of each scheme.

‘For instance, after a mini-grid system like this is installed, the households that sign up to the scheme need to agree amongst themselves on how they will contribute labour or materials for the upkeep and maintenance of the plant,’ says Karumba. ‘There needs to be shared responsibility about how to protect the infrastructure, clear away vegetation from the plant and the power lines, getting spare parts to make repairs, and so on.’

There need to be mechanisms in place to encourage members to stick to those rules.

‘So, for instance, what we saw in some of the failing schemes, is that while a member might agree not to draw off more power than they are allowed, they might nevertheless try to do that. If one person draws too much power, the system gets overloaded and the entire grid shuts down. So if one person misbehaves, the entire community is impacted.’

To address this, the scheme rules usually allow for the offending household to be disconnected from the grid, with a steep penalty to be paid before they are reconnected.

In some of the communities which Karumba visited, she found that some members might break the schemes rules by connecting a relative’s house to the grid, or they might stop paying their monthly bill because they believed they no longer needed to pay for the electricity as they had contributed in labour and materials for the upkeep of the plant.

It’s in cases like this where strong leadership is needed in order to enforce the scheme rules and protect the functioning of the entire mini-grid. Where leadership is weak, and doesn’t clamp down on rule breakers, Karumba found that the schemes generally fail. When rules are enforced, the schemes usually work well.

A functioning scheme, in Karumba’s research, constituted one that is able to supply all its active members with power.

Karumba hopes that her findings will help inform Kenyan policy, relating to the rollout of renewable energy options here. While awaiting her doctoral graduation, she has returned to her position as a civil servant there, working in the Department of Planning and Statistics, where she is attached to the energy and infrastructure planning division.