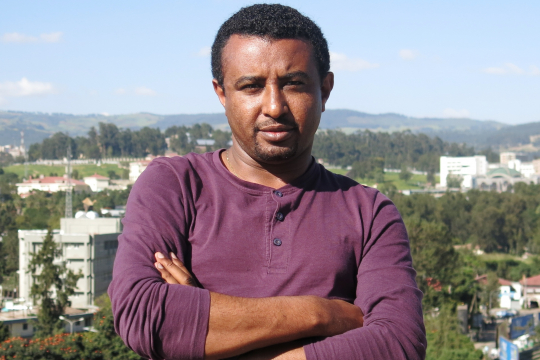 How EfD is helping Ethiopia steer towards a green economy

Ethiopia has ambitious plans to transition towards a green economy. Meet Dawit Woubishet Mulatu, a researcher at the Environment and Climate Research Center (ECRC), EfD Ethiopia. He spoke with us about Ethiopia’s Climate Resilient Green Economy initiative (CRGE).

What are the top environmental and development issues in Ethiopia?
One of the major issues is the energy crisis and the associated risks with rising demands. You see this with discussions around the Grand Ethiopian Renaissance Dam (GERD) under construction near the border with Sudan. How do we manage the landscape when many of the waterways are trans-boundary, especially with the potential for soil erosion and flooding?

Disaster risk is currently the top concern there. More than 300,000 people are affected by waters and floods. But if you manage your forest and landscape effectively, you can reduce this kind of risk while at the same time maintaining water availability. Tree planting can play a role in managing the landscape. The government has initiated an effort to plant billions of trees. That indicates that watershed management is one of the main issues in Ethiopia.

There is also an initiative by the government to expand the types of agriculture in that area and do some forest and landscape restoration. You can diversify by having fruit or other cash crops for production in that area, rather than only producing cereals and waiting for the rainy season. That is better for the environment and provides more security for the farmers.

What is the Ethiopian government doing to green its economy?After the Copenhagen Climate Conference in 2009, the Ethiopian government developed a Climate Resilience and Green Economy (CRGE) strategy. The idea is to reduce carbon emissions from our baseline of more than 400 million tons of carbon. The government identified strategic sectors like industry, agriculture, forest, livestock, and urban areas for intervention, with the goal of being on par with middle-income countries by 2025 and based on carbon-neutral growth.

When Ethiopia developed this strategy in 2011, there were conditional and unconditional issues because everybody expected some support from the developed countries. Some of the targets were framed in a conditional sense, depending on getting the financial support.

Some of these plans are not cheap and, after the financial crisis, many of the developed countries started looking internally because they were challenged economically.  Consequently, we're not progressing a lot on some of the aspects, but there has indeed been some significant progress.

What are some of the achievements?
Transportation is one. Addis Ababa has introduced a light railway transit for commuters. That will contribute a bit to emission reduction. Also last year, a railway connection to Djibouti was completed, which is very important because Ethiopia is a land-locked country.  You can imagine the amount of emissions from all the big lorries bringing goods from the Djibouti port to Ethiopia. So, switching to rail, which is usually electric, will have big benefits in terms of emission reductions.

Also, the forest sector development program, which I mentioned before will have big benefits in terms of carbon sequestration.

How is EfD providing input to the CRGE and Ethiopia’s climate commitments?
Last year the Ethiopian Environmental Forest and Environment Commission requested that the World Bank assess the implementation of the CRGE.  This year, all countries can revise their Nationally Determined Contribution (NDC), i.e., their plan for reducing climate emissions, and then submit it. When the updated Ethiopian CRGE strategy is submitted, Ethiopia will submit the NDC after the parties' agreement. The Environment Commission is working closely with the World Bank to revise the Ethiopian NDC and submit it to the UNFCCC. I'm working for the World Bank on this, and I'm also coordinating the World Bank team and the Commission. The government is very interested in getting input and technical advice.

One of the pieces of feedback we’re providing is that the current NDC gives very generic and technical advice. It needs to be elaborated on and with more detail on some of the components. There is a technical team looking at re-estimating emissions scenarios with updated information on emissions, including some of the developments I mentioned: railway transit, energy production, the forest issue, livestock intensification.  All these things affect the emissions trajectories, so we need new estimates.