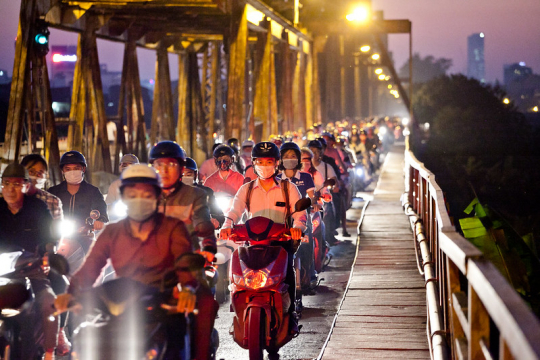 Air pollution is a problem in Vietnam. Photo: EfD

In November of 2020, Vietnam passed a comprehensive overhaul of the nation’s environmental law. The newly adopted legislation, which will go into effect on January 1, 2022, harmonizes Vietnam’s approach to environmental protection and introduces a suite of new management tools, including economic incentive approaches. Major elements of this landmark legislation is developed with input from EfD.

Vietnam has one of the most dynamic economies in the world, but its rapid growth has placed strains on the environment and public health. Pollution from the industrial sector is a major problem, particularly in the form of air and water pollution. In addition, climate change poses a serious threat to Vietnam’s long-term development, as the low-lying nation is highly vulnerable to flooding. Numerous studies have shown that even moderate levels of sea rise will submerge much of the Mekong Delta, potentially displacing millions of people.

EfD’s Vietnam center has been at the forefront of researching economic approaches to managing these environmental risks. EfD’s 2018 annual meeting, held in Hanoi, provided an opportunity for Vietnamese policymakers to tap into this expertise.

One of the highlights of the meeting was EfD’s signature Policy Day, with dialogues between researchers and government officials. That day featured the presentation of a report for the Asian Development Bank by EfD researchers, including EfD Vietnam’s center director Pham Khanh Nam, on “Opportunities for Scaling Up Market-Based Approaches to Environmental Management in Asia.” The report presented experiences with market-based instruments for managing the environment and natural resources in Asia and featured detailed case studies from eight different Asian countries.

The timing of the report’s release and presentation at the policy day was fortuitous as Vietnamese policymakers were in the process of overhauling and modernizing the national environmental legislation. There was a strong interest in fresh approaches to protect the environment while supporting economic development. As Vietnam has evolved away from central planning to a more market-based economy, the environmental regime hadn’t kept pace and was still heavily reliant on inflexible command-and-control mechanisms.

Continued discussions with the government

The discussions on Policy Day sparked a great deal of interest from the government. The Ministry of Natural Resources and Environment in Vietnam invited the EfD Vietnam team to provide input into the revision of the environmental law.

A highlight of these interactions was a November 2019 meeting held at the request of the Minister of Natural Resources and Environment, for EfD Vietnam researchers to brief ministry staff on the details of different approaches to environmental protection. The discussion was wide-ranging and covered such topics as regulatory mechanisms, information-based approaches like public disclosure provisions, and other tools like legal liability and behavioral nudges.  The primary focus of the day, however, was on market-based instruments such as fees and cap-and-trade programs.

As the law moved to completion, Pham Khanh Nam participated in discussions with the Minister of Natural Resources and Environment and staff about the bill’s final provisions. The result of these interactions was the introduction of market-based instruments into Vietnam’s approach to environmental protection.

Vietnamese policymakers now have a whole new set of innovative options for addressing environmental challenges at their disposal, including:

As Pham Khanh Nam noted, “Of course, what’s written in the law can be different than what actually happens. And in reality, there is a big gap right now. But what we need at the beginning is to have that framework in the law.”

With the framework in place, Vietnam’s policymakers have access to the array of tools they need to create long-term green growth for the country. As they move forward with implementation, they also have a trusted source of expert advice and insight in the form of EfD Vietnam.