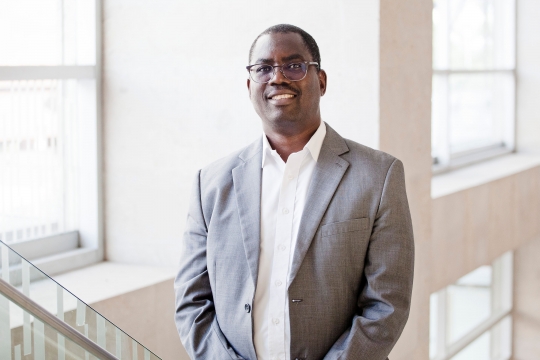 In many countries in southern Africa there is a conflict for land between the local communities who live in poverty after losing their ancestral land to colonial powers, and the state agencies who are tasked with protecting wildlife on the same land today. Both have legitimate needs and responsibilities in relation to the land. Prof Edwin Muchapondwa is a leading policy-relevant researcher looking to find solutions.

Edwin Muchapondwa’s research background is in biodiversity conservation, natural resource management, and climate change. He took his first steps in field research while doing his doctoral studies at the University of Gothenburg, which he began in 2000. After that, he returned to his home country Zimbabwe, but he says it was challenging to start a successful career because of the economic hardships at that time and the lack of

research funds. That’s why he moved to Cape Town, South Africa, where he later helped establish the EfD South Africa center, the Environmental Policy Research Unit (EPRU) at the University of Cape Town’s School of Economics.

The same stories of land conflicts are common in many African countries, Muchapondwa has found. For this reason, he started interacting with the local communities and park agencies, to get a better understanding of their perspectives on the land conflict.

“I wanted to find out what incentives the park agencies needed in order to start collaborating with the local communities,” he explains. “Given things like broken park fences and inadequate enforcement resources, you cannot succeed in conservation if you don’t have the local communities on your side.”

Two factors motivated him to do this research. The first was a government report that indicated the prevalence of poverty in wildlife-abundant rural areas.

“It made me wonder how come these communities are in poverty, when they are surrounded by wildlife, which is a huge asset. I wanted to help resolve this paradox by finding win-win solutions.”
The second and decisive factor for Muchapondwa was the EfD model which supports policy-relevant research on the environment, aimed at reducing poverty and promoting other sustainable development goals. This means that the research agenda has to be developed in collaboration with local stakeholders and policy makers.

“If I didn’t have support from EfD, I would probably have focused on low-cost desk research, just to secure enough publications for a promotion in my career,” Muchapondwa says, in reflection. “But because of EfD, I was able to follow my desire of contributing to meaningful change in society, while at the same time progressing in my career."

When defining research questions relating to these issues, Muchapondwa generally has over a dozen meetings with local stakeholders, and will present the findings of his research during these interactions.

“This became an ongoing interaction with the local organizations, governmental institutions and the communities. I became a part of the ongoing conversations in society.”

He acknowledges that his research is only one input in the decision-making process, so the challenge is to get his evidence-based recommendations and solutions turned into action at a policy level. This can take time because of the many agencies involved and the complex issues at play. But in Muchapondwa’s experience, he has often received positive responses from stakeholders, who generally seem open to what these rigorous findings call for.

“EfD’s model has had an impact on how the whole research process unfolds, which benefits local communities and policy makers,” Muchapondwa says. “I always know what they are talking about within my research areas. Accordingly, when I produce research results, it has a ready audience.”

This continuous involvement with local communities, policy makers, and other stakeholders is what allows Muchapondwa to provide the appropriate information to the right people at the right time.

Another important role EfD plays is funding of policy-relevant research on issues that have been identified by local researchers as critical for sustainable development and poverty alleviation. Muchapondwa encourages the continuation of the EfD model for funding this type of research in the Global South, which he thinks is likely to be ignored otherwise.

“Without properly packaged funding for policy research, it would have been difficult to make progress in the research process. Most importantly, the ability to do policy research gave me as an academic the opportunity to do something for local communities and wildlife conservation in one stroke,” he concludes.