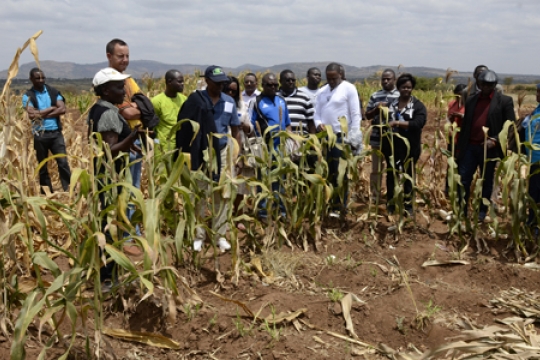 EfD-Kenya fellows Wilfred Nyangena and Geophrey Sikei, were engaged in the review and synthesis of literature on climate change research in the COMESA region and how it has influenced policy. This was at the request of the Regional Strategic Analysis and Knowledge Support System for Eastern and Central Africa (ReSAKSS-ECA). Special focus was on the links between climate change, agriculture and food security.

This review was informed by the vulnerability of the poor and the marginalized to impacts of climate change. Thus, the review was meant to guide policy makers to target and implement effective adaptation initiatives. The study provided an assessment of the extent to which information from climate change studies is being integrated into development practice and decision making in agricultural activities in the COMESA region.

Within the COMESA region, little is known about the research evidence available to inform policy formulation. Moreover, it is not clear how the policy initiatives being implemented are informed by scientific evidence. There are relatively few studies on the extent of impacts of climate change or even the effectiveness of available adaptation strategies. There are even fewer studies on climate change mitigation. The existing studies are scattered in various sources; there is lack of a comprehensive synthesis of the available knowledge.

The review has shown that climate change is already here with us and its effects are predicted to worsen, with serious implications on food security, income generation and livelihood systems. Evidence shows that there are very few peer reviewed papers by African scientists on almost any aspects of climate change, from social to scientific works. The majority of the work is by experts from elsewhere, an indication that either local capacity is lacking or there are no research funds or interest from local institutions. Studies on estimations and modeling of climate change have been done at a very high scale or at a global scale. These global models are unable to represent finite atmospheric features that occur at local levels. Yet, these smaller details can have a big impact on local climate, which is one reason the effects of climate change are expected to vary from one geographic location to the other. Downscaling climate models is critical as it can allow for examination of relatively small areas in detail - in some cases down to 25 square kilometers, a far higher resolution than that offered by global climate model simulations. Downscaled data can be used to develop more precise climate change adaptation plans. Without such data, this inadequacy results in high climate risks.

Governments have reacted by formulation of policies and strategies for dealing with climate change causes and impacts, both at national and regional levels, which is a good starting point. However, the main challenge lies in the implementation of the identified priorities, a step that remains largely unfulfilled due to financial, technical and even capacity constraints. Worse still is that the priority identification may not be well embedded in science, given the paucity of precise information on climate change at a local scale.