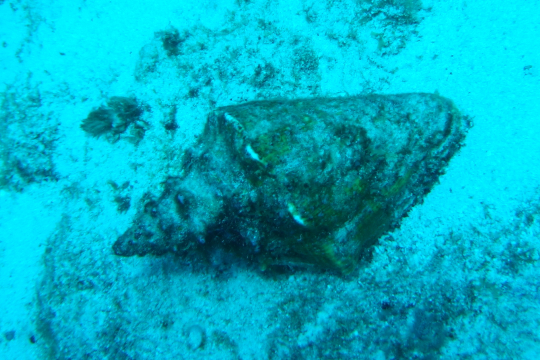 The Queen Conch is very important as a food source in the Columbian Caribbean. It’s also the subject of overfishing and the catching of it has been banned in many countries.

One reason why it’s tempting to overfish the Queen Conch is the chance of catching a pearl. A single, elusive conch pearl is found only in every 10,000-15,000 shells, and less than 10% of these are gem quality. Still, with prices ranging from $2,000-$15,000 per carat, it’s a lottery with very desirable prizes

The allowed fishing quota is currently 8% of the biomass per year. EfD researchers Jorge Marco Renau, Diego Valderrama, Mario Rueda, and Ph.D. student Maykol Rodriguez-Prieto studied a rotational harvesting scheme where a four-year closure is followed by catching 30% of the stock in the fifth year.

Importance for environment and economy

The closures allow the queen conch biomass to recover, leading to an 11% increase in stocks compared to continuous harvesting. Closures also result in a 26% increase in long-term economic benefits upon reopening the fishing grounds.

“It’s an important part of the country’s culture and also a great source of nutrition.”

Since the suggested scheme has great implications for the fishermen, the researchers suggest that the local fishing communities should be more involved in a rights-based management framework, such as a TURF program (Territorial Use Rights for Fishing).

They also suggest that is should be allowed to use scuba-diving equipment, which is currently banned.

“Diving to maybe 10-12 meters for eight hours a day is dangerous. In addition, you prefer to catch the small conch that is found in shallow waters, which depletes the stock even more,” says Diego Valderrama.

Jorge Marco Renau also underlines that their recommended management system works very well for many other species as well.

Their award-winning research has also been published in Marine Resource Economics.

About the Peter Berck’s Best Discussion Paper Award:
The jury sought to highlight the contribution of quality and policy-relevant research funded by EfD with the network in the Global south.
Criteria for the awards:
* Involvement of researchers in Global South (EfD funded project, young researcher)
* Policy relevance
* Research design
* Analysis