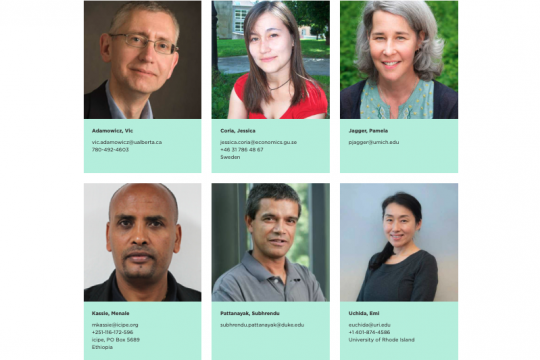 A new Research Committee has been appointed – ready to receive proposals

The EfD Research Committee is reviewed and renewed annually, with each member having a mandate for three years, renewable. A new committee was elected by the end of 2022. They will soon send out a call for proposals for the EfD Research Fund. So now is the time to start preparing proposals!

The EfD Research Committee has a central role in EfD’s organization. They review and provide comments on all the proposals for the EfD Research Fund. They oversee EfD’s research strategy and the management of the research process. In addition, they provide mentorship for EfD researchers.

“The members of the Research Committee are prominent researchers in the field of environmental and resource economics. They are very committed and do a lot of unpaid work for EfD to help us sustain the high quality of our research,” says EfD’s Research Manager, Franklin Amuakwa-Mensah.

The new Research Committee will have its first meeting by the end of February or early March and after that, they will send out a call for research proposals for the EfD Research Fund.

"We are very grateful for committee members' wonderful work and their commitment to the mission of EfD. A special thanks to the outgoing members, Francisco Alpízar and Rohini Somanathan. I also want to welcome Emi Uchida and  Subhrendu Pattanayak, new members, to the committee," says Franklin Amuakwa-Mensah.

Facts – Appointment of the EfD Research Committee
The EfD Coordination Committee (CC) which consists of center directors nominates candidates for the Research Committee (RC). Each EfD Center Director can express his/her wish to renew (or not) the three most recently appointed RC members as well as nominate one woman and one man each. If directors cannot identify a woman or a man, they cannot nominate two of the same gender. Instead, they will only be able to nominate one candidate. The EfD Advisory Board appoints new members of the RC from among the list of individuals nominated by the CC. The Advisory Board also appoints the Chair of the RC.
Members of the RC are nominated among leading international scholars in relevant areas of the EfD’s research themes.