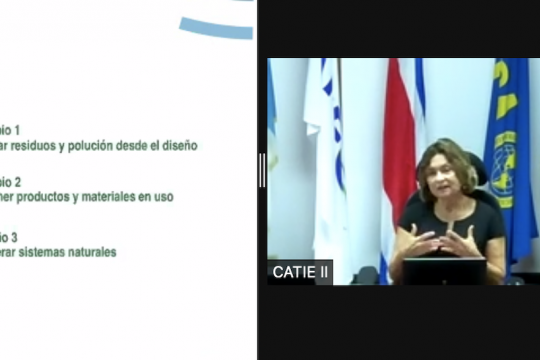 Costa Rica has launched a Step-by-Step Guide to facilitate the transition to a circular economy from local governments, authored by Ph.D Leida Mercado, senior researcher of EfD Central America and CATIE graduated MSc Diana Rivera. This is a relevant document to be used by the 82 local governments of Costa Rica.

The Municipality of Turrialba was the first local government of Costa Rica to use the guide and has become a leading institution in this process. According to Luis Fernando León, major of Turrialba, it provides a great opportunity to involve members of the communities because advancing towards a circular economy requires the participation of all the sectors.

Various guests were present at the launching event, that took place on September 16, including the Vice Minister of the Ministry of Environment and Energy (MINAE) of Costa Rica, Rolando Castro; the General Director of the Tropical Agricultural Research and Higher Education Center (CATIE), Ph.D Muhammad Ibrahim; as well as representatives from organizations such as the Climate Technology Centre & Network (CTCN) and the Municipal Development and Advisory Institute (IFAM).

Rolando Castro mentioned how important it is to have this instrument, as it will help Costa Rica achieve national environmental goals, such as becoming a decarbonized country by 2050.

PhD Leida Mercado and MSc Diana Rivera conducted a broad literature review, followed by a consultation process in which different municipalities, representatives of relevant sectors, and representatives of the central government of Costa Rica were involved. Subsequently, after a thorough validation process, the Step-by-Step Guide was officially launched and is ready to be implemented in other countries in Latin America.

Representatives from many countries, including Argentina, Peru, Uruguay, Panama and Costa Rica, among other Latin American countries attended the event.