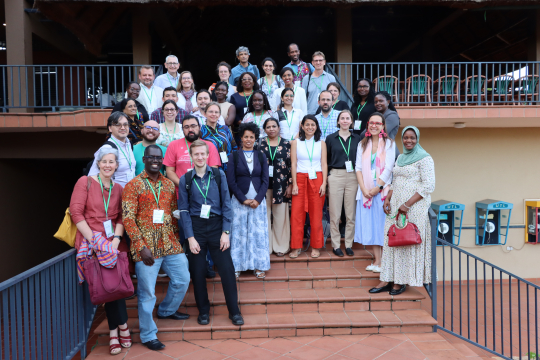 Gender issues were scrutinized at the Annual Meeting

The collaborative program Women in Environmental Economics for Development, WinEED, held a well-attended open seminar at EfD’s Annual Meeting in Uganda. A large number of the participants were men, which shows that gender equality is not specifically a women’s issue, at least not in the EfD network. But a lot of work remains, even within EfD.

Economics is a discipline that has fewer women than other disciplines, such as social sciences, humanities, business, and science and technology. WinEED coordinator Maria del Pilar López-Uribe presented several facts and figures that clearly illustrate gender imbalances on many levels.

Only about a third of the Bachelor’s and Doctorate degrees in economics are awarded to women in the US. She hadn't any figures for low-income countries but assumed that it would not be any better there.

The research presented showed further that women’s representation in economics departments tends to fall as the academic rank increases: Only about one in five assistant professors and one out of ten full professors are women. In addition, the increase in the percentage of women in economics has stagnated since 2000.

“WinEED has a very important role in helping increase women’s participation and representation in high-quality research and policy-making discussions. We have made some progress in our field, but we are still very far from reaching more gender-balanced participation,” said Maria Del Pilar López-Uribe.

The EfD network is no exception when it comes to skewed gender balance. A majority of senior researchers are men at the centers and the admin staff consists predominantly of women.

Men’s applications for research grants are more likely to become approved in general terms within the field of economics. This is, however, something that EfD’s research committee is looking into and addressing, according to Franklin Amuakwa-Mensah, Research Manager, one of the participants in the meeting.

"With the same quality of proposals from both males and females, each proposal has the same chance of being funded," he said.

The gender imbalance in economics is not only about numbers. It’s also about how women are being treated and perceived, how their applications for positions and funding are looked at, how teachers encourage or discourage the students etc. And here lies some of the answers to why there are still so few women in economics and especially in senior positions.

It starts already in middle school. Maria del Pilar López-Uribe presented research that indicates that teachers’ unconscious biases favor boys. Their grading biases in mathematics have a positive impact on boys’ relative test score achievements, their favoring of boys has a positive effect on the boys’ performance and a negative effect on girls’ achievements, and finally, the biases affect boys' and girls' self-assessments of their mathematical skills.

The wordings of recommendation letters are different for men and women, (women are described as diligent and dedicated, while men are described in terms of ability and brilliance). Women are less likely to be promoted and take longer to achieve tenure. Women spend more time in teaching, service, and other tasks that are unlikely to contribute to promotion. They receive more hostile and patronizing questions in seminars. And there were many more examples from the studies she presented.

Some of these behaviors are unconscious, so one way to achieve some change is to raise awareness of the great variety of discriminations. The lack of role models is also a reason why women are in a minority in economics. That indicates that a strong network of women researchers in environmental economics is needed.