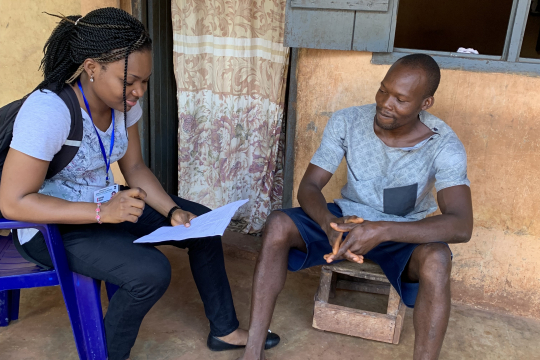 One of the enumerators at the field work for the study on “Risk perception, farmer−herder conflicts and production decisions: evidence from Nigeria”

Food crisis looms in Nigerian households due to farmers-herders conflict

Nigerian households face the risk of a food crisis because of the increasing spate of violent clashes between nomadic herders and crop farmers in the country’s agrarian communities.

Although the crisis has been there for some time, the frequency has increased recently due to the impact of climate change and desert encroachment in the northern part of the country.

The environmental changes have caused the majority of herders, who are mainly from the northern part of the country, to move southward in search of grazing pastures for their cattle, triggering violent clashes between them and southern crop farmers.

Rural households, who engage in subsistence agriculture, suffer the impact of the crisis the most.

A recent study, published in May 2022, has found that many farming households are unwilling to rent large farmlands because they fear that armed herders might vandalize their farms and ruin their investments.

The study titled, Risk perception, farmer−herder conflicts and production decisions: evidence from Nigeria also found that the households, especially those averse to risks, would not dare to invest in or use fertilizers to improve their crop productions.

Some farmers have been forced to shift their interests from highly profitable perennial cash crops to less profitable seasonal food crops to protect their household consumptions.

“The developing trend is worrisome, it has enormous implications for rural livelihoods and portends great danger to food security in Nigeria,” Amaka Nnaji, an EfD researcher and lead author of the study said.

There have been calls from Nigerians, especially those from the south, for government legislation against open grazing to abate the crisis which has claimed many lives and rendered farmlands desolate.

Few states from the south have enacted anti-open grazing legislation, but very little has been done to enforce the laws.

The study supports the position of concerned Nigerians that open grazing is no longer sustainable. It recommends a government policy that guarantees sustainable herding practices and relieves crop farmers’ fears.