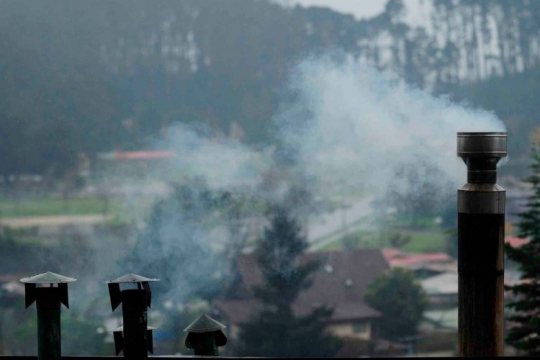 EfD researcher Walter Gómez has been invited as an expert to a public-private committee appointed to revise the Atmospheric Decontamination Plan (PDA) in Southern Chile.

The plan concerns the localities of Temuco and Padre Las Casas, one of the most air-polluted cities in Chile. The objective is to accomplish Chile’s primary norm of environmental quality for breathable particulate matter (PM10) and the primary norm of environmental quality for fine particulate matter (PM2.5) in a time limit of ten years.

The plan is also a part of the Strategy of Atmospheric Decontamination 2014-2018, which defines atmospheric pollution as a national problem. In the case of the southern localities where the main source of heating is wood, the strategy is focused on promoting sustainable heating alternatives in housing, commercial and public sectors. This plan calls for two structural measures:

The PDA also includes measures for other sources of pollution, such as industry, transport, and wood burning, which contribute to the formation of secondary PM2.5, reducing air quality and impacting people’s health. Both groups of measures related to households’ reality and industries are fundamental to reduce diseases related to pollution and therefore to reduce public health expenditure at a local level.

Apart from the structural measures, the PDA also considers the restriction of pollution sources to help to diminish the levels of PM10 and PM2.5, along with activities of education and information to be implemented in the communities.

“The review of the PDA is a complex process involving two main committees,” explains Walter Gómez, who is also a member of the EfD collaborative network Sustainable Energy Transitions Initiative (SETI).

In the first operative committee, several governmental agencies (environment, energy, construction, etcetera) study the current results of the PDA and provide an initial proposal of adjustments to the PDA. The second extended committee is formed by representatives of many different actors (academia, industry, ONG, several social organizations, etc.). The extended committee analyzes the proposal and can also suggest other modifications to the PDA.

“The work of the extended committee has been divided into four interest groups. I am involved in the group dealing with fuelwood, stoves, and energy in general and also in the second group devoted to households, buildings, and real estate projects. The work has just started and should be finished in about a year with a new revised version of the PDA ruling the measures for controlling air pollution (and related energy problem) for the near future,” says Walter Gomez.

If you want to know more about the PDA and its implementation, please click here to visit the official webpage of the Ministry of Environment in Chile (in Spanish).