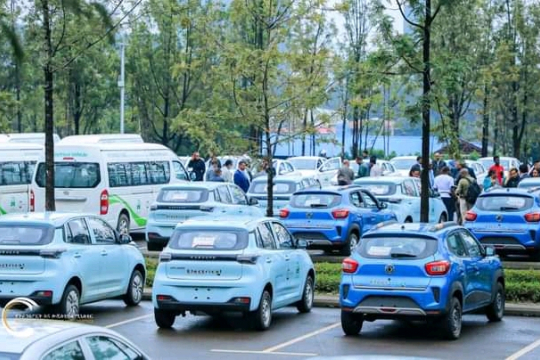 The Ministry of Finance in Ethiopia has exempted electric vehicles from value-added tax (VAT), excise tax, and surtaxes and reduced the import tax on those vehicles. A participant in the Inclusive Green Economy program wrote the proposal that became law in September 2022.

The Ethiopian government wants to reduce air pollution and mitigate climate change. In addition, Ethiopia does not have any oil resources, so the country is currently dependent on increasingly expensive, imported fossil fuels. On the other hand, renewable electricity is cheap in Ethiopia, due to good access to hydro, geothermal, wind, and solar power.

The time was right

Most cars in Ethiopia are currently imported used gasoline or diesel cars, which are bad for the climate, air quality, and traffic safety.

“The government had started to consider doing something about the high taxes on imported electric vehicles, but they didn’t know how,” says Yizengaw Yitayih, Climate Change Senior Expert at the Ministry of Transportation and Logistics, who is a participant in the Inclusive Green Economy Program in Practice (IGE), a so-called IGE Fellow of the 2022 cohort.

Another IGE Fellow from Ethiopia, Jobir Ayalew, who attended the program in 2021, started to look into this issue and prepare for an assessment of the possibility to switch to electric vehicles. This year Yizengaw Yitayih saw that the time was right to present a sharp proposal to the Ministry of Finance.

Cost was the main obstacle

He conducted meetings with car import companies, the automotive industry, and transport associations to learn what the main obstacles were to switching to electric vehicles. He also discussed these matters with the other IGE Fellows in the program. Especially the colleagues from Rwanda and Kenya could contribute with experiences from their countries.

His studies resulted in the report Creating an enabling environment for the introduction of electric vehicles in Ethiopia.

He found that the cost of the vehicles turned out to be the main obstacle. But charging stations also need to be put in place. And to be beneficial for the Ethiopian economy in general and the automotive industry in particular, the cars should be assembled in Ethiopia, that is, completely knocked-down vehicles should get the greatest tax cuts.

The Ministry of Finance asked him to send them the report in the local language Amharic, which he did in April this year. On the 1st of September, the new tax regulation was passed, following the recommendations from the Ministry of Transport and Logistics, based on Yizengaw Yitayih’s report.

“The price for electric cars has now decreased by about 40-50%.”

All electric vehicles are now free from VAT, excise tax, and surtax. The only tax that remains is the customs tax, which has dropped to 15% for fully assembled vehicles, and 5% for semi-assembled, while CKD (completely knocked-down) vehicles, that is, those that are being assembled in Ethiopia are not taxed at all.

Those who can’t afford to buy a car but maybe a moped or motorcycle can also benefit from the tax cuts since all electric vehicles are exempted from taxes.

The Ministry of Transport and Logistics initially built charging stations in three areas in Addis Ababa. After that, they handed over the responsibility to the private sector.

The Ministry of Transport and Logistics has cooperated with a private car sales company in a promotion activity where they provide free transportation with EVs in Addis Ababa for a month. The purpose is to encourage people to choose electric the next time they buy a vehicle.

“The IGE program has been very useful for me. We have built capacity on how to plan for IGE reforms and how to prepare proposals like mine. It’s also been very valuable to learn about the other participants’ experiences,” says Yizengaw Yitayih.

Facts about the IGE program:
The IGE program is a program for capacity development in five African countries: Ethiopia, Kenya, Rwanda, Tanzania, and Uganda. Environment for Development (EfD) and the Gothenburg Centre for Sustainable Development (GMV) at the University of Gothenburg, collaborate in this unique program with partner institutions (EfD Centers) in the participating countries.
About five high-level civil servants per country, 25 people in all, participate per year in the program.