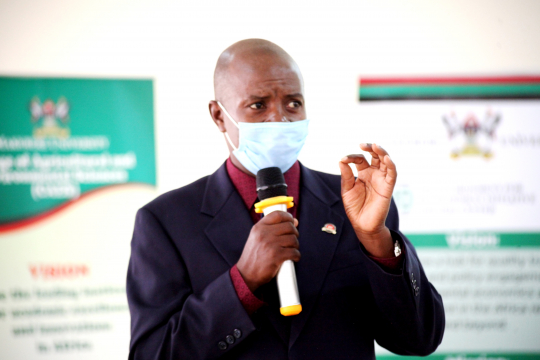 The Director EfD-Mak Centre Uganda Dr. Edward Bbaale has been promoted to the rank of a full professor.

At its 666th meeting held 30th June, 2021, Makerere University’s Appointments Board considered Dr. Edwards Bbaale’s application for promotion from the rank of Associate Professor to a full Professor.

Edward Bbaale, is now a Professor of Economics in the College of Business and Management Sciences, School of Economics, Department of Economic Theory and Analysis of Makerere University.

Edward Bbaale joined Makerere University as a Teaching Assistant in the then Faculty of Economics and Management in 2002-2003 rising to the rank of Assistant Lecturer in 2003-2008, and later to a Lecturer in 2008-2012.

In September 2010-September 2011, Bbaale was awarded a fellowship as a Visiting Research Fellow, Centre for Global Development in Washington D.C. USA, sponsored by IDRC-Canada.

He later rose to the rank of Senior Lecturer, a position he served from August 2012-November 31st 2014.  He was promoted to the rank of   Associate Professor serving the School of Economics in that capacity from 1st December 2014 to 30th June, 2021 when he climbed the top academic ladder of professorship. .

Prof. Edward Bbaale has taught and supervised 16 graduate students to completion, conducted research and consultancies in the area of Development-Micro Economics. At national level, he has coordinated a number of projects aimed at informed policy making, formulation, analysis and advocacy.

One of his papers that used enterprise data, published in the African Journal of Economics and Management Sciences, was voted as a Highly Commended Award Winner at Literati Network Awards for Excellence 2012 (<http://www.emeraldinsight.com/literati&gt;). At a macro level, Edward has undertaken cross-country studies using panel data techniques.

Prof. Edward Bbaale has travelled widely and presented a number papers as an expert at national and international workshops and conferences.